The belief system and character trait underlying political hot topics such as mandatory vaccinations, gun control, and social justice is Machiavellianism, which is one of the three personality traits that comprise the dark triad, along with narcissism and psychopathy. There’s no need to argue with the proponents of such draconian concepts about the specifics of their viewpoints, because it’s not the real problem anyway—their distorted Machiavellian worldview is the real issue. Here are a series of questions that may help them to acknowledge their dysfunctional Machiavellian personality trait, and it will either wake them up to their mental illness, or give you the information you need to set a boundary and move on from your unhealthy relationship with them.

Q1: Are you implying that your desired outcome justifies using coercive force against me or anybody else who disagrees with your viewpoint, even though we haven’t committed an actual crime? In other words, are you saying that the “ends justifies the means”? Q2: If I refuse to comply with what you see as your desired outcome, and even though there’s no actual victim to my refusal to comply, should I be punished? Q3: Should the State use coercive force against me, my family, and/or my property if I continue to refuse compliance? Q4: Even though the centralization and monopoly of power has historically never benefited the common man, why do you think it will finally work now? 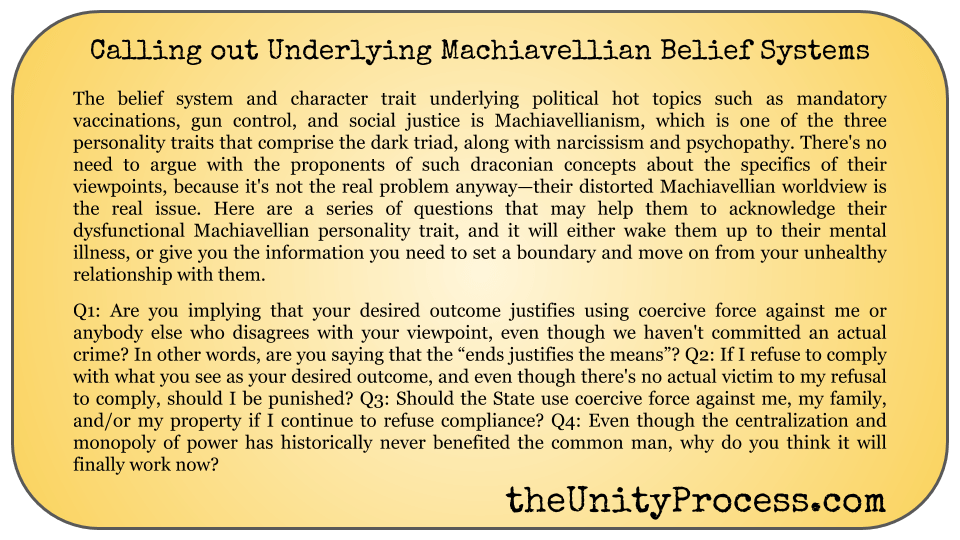