You are here: Home » Natural Law » Rights vs Privileges – The NFL Protests: Taking a Knee & Bowing

Do the employees of a private corporation, such as the National Football League (NFL – which holds their player’s rights), who are privileged to play American football at the professional level, have the right to free speech at their employer’s offices (stadiums)? What is the nature of rights and privileges, and what is their difference?

There is an argument, such as when Facebook, YouTube, or Google censors people, that since it is a private company, they can do whatever they want, because it is not a right, but a privilege to use their services.  Our right to free speech is not covered when dealing with a company, who can operate their property as they see fit, as long as they are not discriminating in their hiring practices, or inciting violence against others.

Rights denote the ownership of property; either your rights are owned by you, or your rights are owned by another. If you’re fighting to keep your rights, you never really had them in the first place — they were external to you, and were instead privileges granted to you by an external entity who owned your rights. Privileges can be revoked and withdrawn, and are based on receiving permission from the one who owns the rights, and the title to rights can be transferred from one party to another, and in many cases, rights can be forfeited away when they are left unclaimed, as most people alive today have already done.

If you are negotiating rights, you never had them to begin with. Rights are either held by an external party, such as a master, religion, culture, state, or tribe, and privileges granted from identifying with them, or your rights are within you, stemming from your internal connection to your creator, which are inalienable. The Bill of Rights did not grant our rights, they were a list that identified them, so that we could see who held the rights; the people and not the State. “Might makes right” where one group infringes upon another group or individual’s privileges, only works when the individual identifies their rights as stemming from a source outside of themselves, but when the individual takes full ownership of their property (Self), their rights are internal, and cannot be infringed upon.

In psychology, the location of our rights is called our locus of identity, which can be either internal or external. A sovereign individual has an internal identity, and all rights come from within, but a subject has an external identity, and if they rebel or leave their group, they lose all of their privileges that come from identifying with that group, until which time they submit and return. Rather than rebelling against the State or group for their handling of our privileges, a transfer of title is necessary, which transfers ownership of the property to the being inhabiting the vessel over from the external party’s current custody.

For example, the Second Amendment in the Bill of Rights does not grant us a right firearm ownership, as the Second Amendment would be a privilege if it did, but it merely expresses the people’s inherent right to self-defense, and that the government should respect that right, which is found within all individuals and creatures within nature, whether they choose to exercise it or not. The government cannot grant us rights, but must respect, and be held accountable when it disrespects, our inherent (and natural) rights. In the initial spirit of the US Constitution and the Bill of Rights, which clarified and amended the Constitution, the US government was only meant to be an institution which upheld and protected our inherent rights, and served the people in ways that respected their authority. However, it has been replaced by a corporation that currently owns our rights, like all of the other monarchies and tyrannies of the world. See a modern day birth certificate, which lists the current leans taken out against the property by the US Corporation.

The Second Amendment is a RIGHT, which is exactly why the government cannot grant it. A government can only grant privileges, and not rights. Rights are inherent, and found within the individual, while privileges are granted by the party who holds the rights to their subjects as property. Who owns the rights to the property (body/vessel)? The one who owns the rights to the property is the only one who can take away the privileges to the property. The Bill of Rights detailed that it was the people who owned their property rights (to their body/vessel), and not the government, and that it was the government’s responsibility to serve the people and protect their rights from all enemies foreign and domestic. In this way, elected officials in the US Government are meant to be followers, and the people are their leaders; elected officials are only meant to be in service to their constituents, and not leading them.

Why are Athletes Bowing, Anyway? Might the athletes be “subjects” bowing to their real owners and masters?

Bowing is the act of lowering the torso and head as a social gesture in direction to another person or symbol. It is most prominent in Asian cultures but it is also typical of nobility and aristocracy in many countries and distinctively in Europe. It is also used in religious contexts, as a form of worship or veneration. ~Wikipedia

The Responsibility of Self-Government

It behooves us to remember that men can never escape being governed. Either they must govern themselves or they must submit to being governed by others. If from lawlessness or fickleness, from folly or self-indulgence, they refuse to govern themselves, then most assuredly in the end they will have to be governed from the outside. They can prevent the need of government from without only by showing that they possess the power of government from within. A sovereign cannot make excuses for his failures; a sovereign must accept the responsibility for the exercise of the power that inheres in him; and where, as is true in our Republic, the people are sovereign, then the people must show a sober understanding and a sane and steadfast purpose if they are to preserve that orderly liberty upon which as a foundation every republic must rest. ~Teddy Roosevelt, At Jamestown Exposition, April 26, 1907., Mem. Ed. XII, 593; Nat. Ed. XI, 312.

Are you Worthy of Self-Government?

You cannot give self-government to anybody. He has got to earn it for himself. You can give him the chance to obtain self-government, but he himself out of his own heart must do the governing. He must govern himself. That is what it means. That is what self-government means. . . . There must be control. There must be mastery, somewhere, and if there is no self-control and self-mastery, the control and the mastery will ultimately be imposed from without.” ~Teddy Roosevelt, At University of Wisconsin, Madison, April 15, 1911., Mem. Ed. XV, 548; Nat. Ed. XIII, 594.

In so far as society is itself composed of de-individualized human beings, it is completely at the mercy of ruthless individualists. Let it band together into groups and organizations as much as it likes – it is just this banding together and the resultant extinction of the individual personality that makes it succumb so readily to a dictator. A million zeros joined together do not, unfortunately, add up to one. Ultimately everything depends on the quality of the individual, but our fatally short-sighted age thinks only in terms of large numbers and mass organizations, though one would think that the world had seen more than enough of what a well-disciplined mob can do in the hand of a single madman […]

People go on blithely organizing and believing in the sovereign remedy of mass action, without the least consciousness of the fact that the most powerful organizations in the world can be maintained only by the greatest ruthlessness of their leaders and the cheapest of slogans.

~Carl Gustav Jung – The Undiscovered Self

The following are the definitions of language that pertains to today’s discussion.  Sourced from Black’s Law Dictionary, 2nd Edition, 1910: 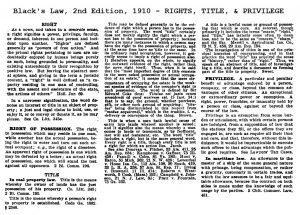 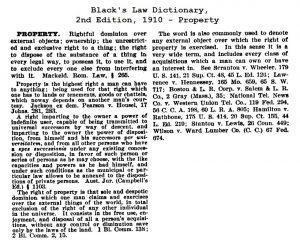