You are here: Home » Manipulation » School as Religion

The following is an excerpt from “The Underground History of American Education“, by John Taylor Gatto: 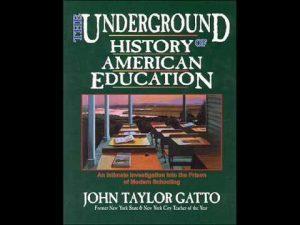 School is a religion. Without understanding the holy mission aspect you’re certain to misperceive what takes place as a result of human stupidity or venality or even class warfare. All are present in the equation, it’s just that none of these matter very much—even without them school would move in the same direction. Dewey’s Pedagogic Creed statement of 1897 gives you a clue to the zeitgeist:

Every teacher should realize he is a social servant set apart for the maintenance of the proper social order and the securing of the right social growth. In this way the teacher is always the prophet of the true God and the usherer in of the true kingdom of heaven.

What is “proper” social order? What does “right” social growth look like? If you don’t know you’re like me, not like John Dewey who did, or the Rockefellers, his patrons, who did, too.

Somehow out of the industrial confusion which followed the Civil War, powerful men and dreamers became certain what kind of social order America needed, one very like the British system we had escaped a hundred years earlier. This realization didn’t arise as a product of public debate as it should have in a democracy, but as a distillation of private discussion. Their ideas contradicted the original American charter but that didn’t disturb them. They had a stupendous goal in mind—the rationalization of everything. The end of unpredictable history; its transformation into dependable order.

From mid-century onwards certain utopian schemes to retard maturity in the interests of a greater good were put into play, following roughly the blueprint Rousseau laid down in the book Emile. At least rhetorically. The first goal, to be reached in stages, was an orderly, scientifically managed society, one in which the best people would make the decisions, unhampered by democratic tradition. After that, human breeding, the evolutionary destiny of the species, would be in reach. Universal institutionalized formal forced schooling was the prescription, extending the dependency of the young well into what had traditionally been early adult life. Individuals would be prevented from taking up important work until a relatively advanced age. Maturity was to be retarded.

During the post-Civil War period, childhood was extended about four years. Later, a special label was created to describe very old children. It was called adolescence, a phenomenon hitherto unknown to the human race. The infantilization of young people didn’t stop at the beginning of the twentieth century; child labor laws were extended to cover more and more kinds of work, the age of school leaving set higher and higher. The greatest victory for this utopian project was making school the only avenue to certain occupations. The intention was ultimately to draw all work into the school net. By the 1950s it wasn’t unusual to find graduate students well into their thirties, running errands, waiting to start their lives.