You are here: Home » Manipulation » Self-Ownership: My Body, My Choice?

I took a lot of unexpected flack on a recent post about taking self-ownership, and how owning ourselves is the property right from whence all other property rights stem, because many people thought that I was making a pro-abortion post along the lines of “my body, my choice”. Here’s the post I shared: 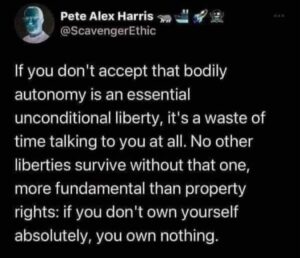 Before I discuss my observations about how people responded, I will critique two things about the above tweet: First off, liberty is not unconditional, there is no such thing as unconditional liberty, as there are conditions attached to exercising one’s rights, such as obeying natural law and the non-aggression principle, and being an objectively reasonable person. Secondly, self-ownership IS property ownership, one cannot own external property and not own themselves (their thoughts, feelings, behaviors, and outcomes), one must first own themselves to truly own any other external thing.

With that out of the way, here’s my clarification, the “my body, my choice” argument only applies to those who have and are taking responsibility for their lives, and who already fully own themselves, and not for somebody trying to avoid taking responsibility. You cannot get an abortion as a means of avoiding taking personal responsibility for your outcomes and also be in the state of owning yourself, it just doesn’t work that way. To be clear, not all abortions are running from responsibility, but honestly, most are, and those screaming “my body, my choice” probably aren’t heavy into taking personal responsibility to the point where they are living a sovereign and autonomous life.

When it comes to certain forced/coerced medical procedures that shall not be named to avoid the censor-bot, I can wholeheartedly say “my body, my choice”, because I have taken 100% responsibility for my thoughts, feelings, behaviors, and outcomes, therefore by extension I’ve taken responsibility for my physical health and the quality of my life. A screaming harpy who wants freedom from responsibility is not owning themselves, rather they’re throwing a temper tantrum as a childish attempt to get their cookie.

It should be noted that the main difference between an obligation and a responsibility is ownership, so those who are being responsible are owning that which they are responsible for, whereas one who is obligated to act in a certain way has no ownership over that which they are acting in behalf of, and are more in a child like and/or slave state than that of a rational adult. I think it is interesting that the political right may be getting tricked into attacking the concept of self-ownership now just because leftists are using the “my body, my choice” argument incorrectly to justify their immaturity and lack of 1) self-ownership and 2) personal responsibility. Apparently the left and right have gotten into another tussle about the next “current thing”, and while they’re discussing and outraged over abortion “rights” masquerading as self-ownership, I am reminded of what Noam Chomsky said:

The smart way to keep people passive and obedient is to strictly limit the spectrum of acceptable opinion, but allow very lively debate within that spectrum—even encourage the more critical and dissident views. That gives people the sense that there’s free thinking going on, while all the time the presuppositions of the system are being reinforced by the limits put on the range of the debate. ~Noam Chomsky

I’ll leave you with two quotes from somebody who understood self-ownership and self-government quite well, Teddy Roosevelt:

“It behooves us to remember that men can never escape being governed. Either they must govern themselves or they must submit to being governed by others. If from lawlessness or fickleness, from folly or self-indulgence, they refuse to govern themselves, then most assuredly in the end they will have to be governed from the outside. They can prevent the need of government from without only by showing that they possess the power of government from within. A sovereign cannot make excuses for his failures; a sovereign must accept the responsibility for the exercise of the power that inheres in him; and where, as is true in our Republic, the people are sovereign, then the people must show a sober understanding and a sane and steadfast purpose if they are to preserve that orderly liberty upon which as a foundation every republic must rest.” ~Teddy Roosevelt, At Jamestown Exposition, April 26, 1907., Mem. Ed. XII, 593; Nat. Ed. XI, 312.

“You cannot give self-government to anybody. He has got to earn it for himself. You can give him the chance to obtain self-government, but he himself out of his own heart must do the governing. He must govern himself. That is what it means. That is what self-government means. . . . There must be control. There must be mastery, somewhere, and if there is no self-control and self-mastery, the control and the mastery will ultimately be imposed from without.” ~Teddy Roosevelt, At University of Wisconsin, Madison, April 15, 1911., Mem. Ed. XV, 548; Nat. Ed. XIII, 594.

Just to state again, “my body, my choice” implies being in a state of self-ownership, and taking personal responsibility for one’s thoughts, feelings, behaviors, and outcomes is what must be done to continually earn bodily autonomy over one’s own personal property, aka body. “My body, my choice” only applies to those who’ve actually earned ownership of their Self, and who’ve proven their ability to take personal responsibility for themselves.

Those currently stating “my body, my choice” as a slogan have inverted it to mean “the freedom from taking personal responsibility”, just like the left continually does when they hijack and invert words, concepts, and sayings that apply to the fundamental principles of liberty. For example the word “liberal” which comes from the Latin “liberalis” and means “of freedom, pertaining to or befitting a free person” was re-branded to mean a “social democrat”, as well as “anarchy” which they turned into “chaos” but actually means “without rulers”, and is incidentally the state one is in when they fully own themselves.

Please don’t take the bait and attack the concept of self-ownership just because deranged leftists parrot it around as if they actually own themselves. Rather, see this as an opportunity to look into the mirror and reflect on your own state (or lack thereof) of self-ownership of your thoughts, feelings, behaviors, and outcomes to shore up any of your own shortcomings, and grow as a person. The world could use a lot less projection and much more reflection, as reflectivity is a hallmark of those who are accountable for their choices, take responsibility for that which they own, and exercise mastery over their lives.

One Response to “Self-Ownership: My Body, My Choice?”