You are here: Home » Gray Mysticism » The Postmodern Deconstruction of the Star Wars Universe

In the original Star Wars trilogy, the light side of the Force puts forth a process oriented vision of peace, while the dark side puts forth an “ends justifies the means” vision of peace. However, in the new movie “The Last Jedi”, both the light and dark sides are conveying the same message to the audience, “be in the moment, and destroy the past” as their vision of peace, as Kylo wants to destroy the idea of Rey’s family of origin, the Sith, and the Jedi, while Luke wants to destroy his nephew and the Jedi Order. The movie then proceeds to bastardize the legacies of, and then kill off, all of the old characters in an unceremonious fashion to support their vision of a heartless and soulless present moment. 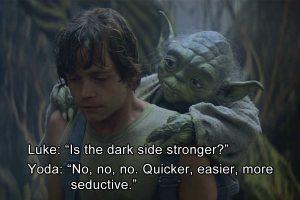 Luke: “Is the dark side stronger?”
Yoda: “No, no, no. Quicker, easier, more seductive.”
~Star Wars: The Empire Strikes Back

In this new trilogy (EP 7 & 8), Rey takes the path of the dark side in that she gets Force powers too easily, while Kylo Ren, the underwhelming heir of the Skywalker lineage, has trained his whole life, which is more of the original concept for the light side. The light and dark side’s have literally been inverted in the new trilogy, where the light path is actually the dark side, and the dark path is actually the light side. Those who understand other paths of morality, understand that the path of “inversion”, of inverting traditional norms and morals, is called “Satanism”. Satanism isn’t about an evil being named Satan, but about inverting (turning upside down) morality and traditions. Not only does the new trilogy have Postmodern philosophy embedded within it, but it also has the inverted Satanic philosophy embedded within it.)

However, destroying the past is a destructive worldview (Deconstructionism and Postmodern worldviews, really), as our past culture is what gives us our stability, identity, and acts as a foundation to our experiences in the present moment. When we destroy our past culture and norms, we become tremendously easy to manipulate, for we lack a firm foundation, balance, and a stable identity. Instead, we should learn and build upon our past as we continue to move forward with a clear vision of our future—as this is a healthy and reasonable process oriented progression.

Historically, whenever a nation or civilization was conquered by an invading force, or an uprising occurred that overthrew the current norm, the past cultural icons and heritage was destroyed, torn down, burned, and erased from the region. The new culture and history were then rewritten by the victors, and within one generation the past was typically forgotten, and the fabricated history and culture of the invading force was now the new normal. This is never more prevalent than with socialist and communist revolutions, as well as with imperialistic takeovers of foreign countries; and yet this is what is occurring within America’s borders in our politics, media, entertainment, governmental structure, etc., and now even in our Star Wars and Star Trek universe’s, which are American mythologies and cultural bastions that have inspired millions of people over the years.

Was Star Wars the Last Jedi true art, or the deconstruction of true art? It wasn’t art, since art is creative; it was an inversion of art, as it was destructive. The philosophy of tearing down the past is called Postmodernism and Deconstructivism, and it has infected political Progressivism, the New Age movement, modern (third wave) feminism, governments, Progressive LGBTQ+ movements, and most universities worldwide. The sole aim of this philosophy is the deconstruction of western culture as we know it, which they seek to replace with a communal form of socialism known as communitarianism.

Living in the present moment devoid of our past is soulless, meaningless, foundationless, and is an all around empty package; and I refuse to live this way. Rather than allow the heart and soul of our past to be unceremoniously deconstructed, killed, and rewritten, we need to hold onto our culture and traditions and build upon them. We are what we have created and experienced, and we are the process that we are participating in that will take us to where we are going—and this is all based upon our cultural foundations and heritage.

A detailed analysis of the Last Jedi, and how it deconstructs Star Wars:

2 Responses to “The Postmodern Deconstruction of the Star Wars Universe”