You are here: Home » Critical Thinking » Intellectual Self-Defense and the Four Circuits of Being

There are four primary circuits of being, and each circuit transcends yet includes previous circuits. 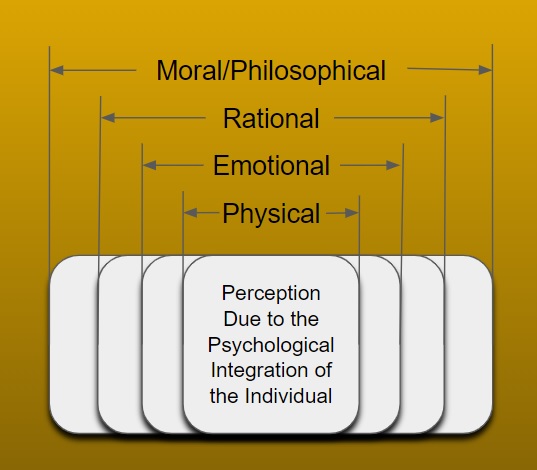 Aggression, which is an unprovoked initiation of force, can take the form of a rational, emotional, or physical initiation of force, and usually happens one or two states of being below a prey’s state of being. For example, a predator may attack a moral argument with either a rational appearing or an emotionally charged argument.  A moral argument such as “everyone has the right to provide informed consent prior to partaking in a risky medical procedure for themselves or their family, therefore mandatory vaccinations are immoral,” might be escalated rationally with “science proves herd immunity from vaccinations is real, and you’re endangering those around you by being unvaccinated” or escalated emotionally with “you’re such a horrible person for endangering children’s lives you horrible antivaxxer.”

When someone initiates the use of force, it’s intended to dominate another person or group, and it does so by escalating an exchange through dropping down into one or more of the lower three circuits. Domestic violence is an example where one party may use emotional violence and the other party will escalate the argument and defeat emotional aggression by using physical force. For example, the man may use a rational argument to support his viewpoint that emotionally triggers his female counterpart, who then uses an emotional argument to defeat him, and then the man unable to defeat her emotional attacks, reacts by using a physical argument, also known as physical violence. This disastrous chain of escalation could be easily prevented by setting some sound personal boundaries on either party’s side, as well as using some basic conflict resolution skill, and in mature couples, this is often the case.

A sophist is someone who will use emotional manipulation against those making a rational or moral argument, but they hide their attacks behind logic as if they’re also making a rational or moral argument. Such people are considered skilled manipulators, and they use rhetoric as their primary means of twisting logic, and to mask their underlying emotionally charged motivations. These types of attacks are typically the hardest to spot, because such people will claim they are being reasonable until they are blue in the face, when in fact reason is just a weapon they are wielding from their unconscious emotionally charged motivations. It is still the initiation of emotional force, but it is done in a covert and often fraudulent manner.

Aggressive behaviors do not have to be tolerated though, and it is perfectly reasonable to use an equal amount of defensive force to protect oneself from the aggressive initiation of force by predatory individuals, but only at the circuit level that it is being initiated at. When somebody uses emotionally charged ridicule, attempting to reason with them with logic or morality will only lead to an emotionally draining defeat, but a quick and witty emotional reply, one that may also call them out on their aggressive behavior and put them in their place, can be an effective means of defending oneself from the initiation of emotional force.

For example, I made a nuanced argument about why gun ownership is an important means of self-defense, and somebody jumped in by ridiculing me with “you have to own a gun because you are compensating for your small penis”. Now, I could attempt to argue with them with the facts about my supposed penis size, or the rationale underlying my moral position, but that wouldn’t get me anywhere, and would only cause me to feel more powerless as they run me in circles. I instead responded by saying “that’s funny, you weren’t complaining about my small penis last night when you were screaming my name in bliss”. Not only did they back off, but they ran away with their tail tucked between their legs and left me alone. I used the force of their attack, and the inertia they generated, against them, making it a net loss for them, and a waste of their time and energy to attempt any further attacks against me. Such people are typically intellectual and emotional cowards, and will run away once they realize they aren’t preying upon a weak willed individual.

Usually, when someone is standing in their moral power as an integrated and psychologically whole person, and only dropping down to the other circuits in rare instances of self-defense and boundary setting, they won’t get challenged physically anyway, and rarely will they be challenged emotionally, except by those who are more skilled in their use of aggression, such as sophists. Learning how to adequately defend oneself from aggressive behaviors with intellectual self-defense is the key to preventing aggressive behaviors from affecting oneself, and as they say, practice makes perfect.

Another means of dealing with such people, and one that I might argue gives intellectual self-defense it’s teeth, is living a life of introspection and self-reflection, and doing what Carl Jung termed “shadow work”, as it seeks out one’s own aggressive tendencies, called unconscious shadows, and works through them to make them conscious. As Jung stated, “knowing your own darkness is the best method for dealing with the darknesses of other people.”  This form of self-knowledge makes the moral individual truly powerful and potent in the face of life’s adversities, including in the face of predatory individuals and groups prone to unconscious shadow projection and/or skilled manipulation.

THE UNITY PROCESS: We’ve created an integrative methodology called the Unity Process, which combines the philosophy of Natural Law, the Trivium Method, Socratic Questioning, Jungian shadow work, and Meridian Tapping—into an easy to use system that allows people to process their emotional upsets, work through trauma, correct poor thinking, discover meaning, set healthy boundaries, refine their viewpoints, and to achieve a positive focus. We practice it together in our groups, and in our individual sessions.