You are here: Home » Critical Thinking » Is “No Mask, No Jab, No Service” the Same as “No Shirt, No Shoes, No Service”? 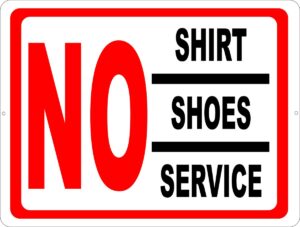 It is being said that a “private” company (many are actually public companies) can refuse service for any reason, that the “no shirt, no shoes, no service” rule can now apply to “no mask, no jab, no service”, and that there is a direct correlation (apples to apples) between the former and the latter. However, this is actually an “apples to oranges” correlation, which is also known as a false equivalence fallacy, since the former is an already established social norm and societal agreement, while the latter is based on dubious underlying assumptions that are not allowed to be discussed or challenged, and the new societal agreement is being forced upon us without any valid reasoning—or our consent.

False equivalence, which could also be expressed as “comparing apples and oranges”, is a logical fallacy in which someone equates two things based on flawed reasoning. It is frequently committed — whether unintentionally or not — in politics, journalism, as well as in various types of online debates.

Here are some assumptions that are being ignored, and those who attempt to discuss and/or criticize them are being demonized and bullied for bringing it up.

Additionally, corporations are a legal construct of government, and corporations that do not comply with government mandates and policies are harassed and/or fined for not complying, meaning that governments are the puppet masters pulling the strings of these so-called “private” companies, and are therefore infringing upon the natural rights of the people. The free market is not able to course correct and punish “private” companies that go along with the mandates, because it’s actually a centrally planned market with the government and corporate monopolies pulling the strings, and using coercion where necessary to enforce their unjust man-made policies.

Changing an agreement without actually acquiring the people’s consent for the change, and not allowing for a rational discourse and negotiation to occur, which means a full disclosure of terms, responsibilities, and truthful data has not been given along with their “offer” of a change of societal rules, implies that there is a fraudulent contract being pushed upon society. All agreements/contracts made with fraud are considered null and void, meaning, you do not need to comply with their terms and rule changes because they are fraudulent due to the presence of 1) coercive practices, and 2) a lack of full disclosure on their part.

Here is one possible solution, found in a law maxim (universal truth):

Legibus sumptis desinentibus, lege nature utendum est. “When laws imposed by the state fail, we must act by the law of nature.” ~Black’s Law, 2nd Edition, 1910