You are here: Home » Archives for problem 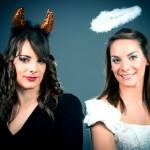 As you may already know from other articles we’ve written, the Trivium is a method of critical thinking based in asking questions in a specific cyclical order.  It comprises the first three of the liberal arts of “grammar, logic, and rhetoric”, where liberal stands for “free man“; historically, the liberal arts where not allowed to be taught to slaves, but only to the “free man”.  The Trivium’s order of asking […] Read more »