You are here: Home » Logic » The Single Cause Fallacy and False Accusations 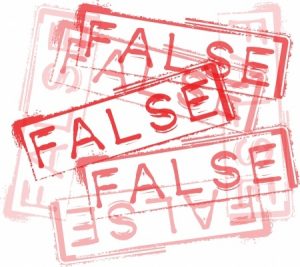 Beware of making and giving credence to the “single cause fallacy” (causal reductionism, complex cause, fallacy of the causal oversimplification, reduction fallacy), for it “typically leads to a myriad of false claims and accusations”, as noted below. It is also connected to the straw man fallacy, as it can be used to reduce a person or argument to a single motivation or reason for being something, thus misrepresenting their complex identity or argument, for example, “you’re only successful because you’re a white male” (reduction to race and gender as reasons for personal success), “you’re guilty of the crime because you’re black and in the area” (reduced to race), or “you’re only saying that because you hate women and are a misogynist” (reducing to a single motivation & ad hominem name calling). Almost all false accusations are based on creating a straw man from a reductionist (single cause) argument of the accused; related concepts are “monological thinking“, “black and white thinking” (which stems from codependent thinking), and “sophistry” (manipulative arguments employed to win an argument, and not to discover the truth).

This particular fallacy, the fallacy of a single cause, can also be referred to as causal oversimplification or the reduction fallacy. One root of this logical fallacy is the assumption that one factor is the direct reason behind a particular issue, because of its occurrence before said issue. Another aspect is the single motive aspect of this fallacy. It is false because there are often multiple motives or reasons causing various issues. To simplify, the fallacy of a single cause is a fallacy that states: Y occurred then X, therefore Y and only Y is the cause of X.

Some major issues with this fallacy are that it leaves no room for actual analytical thought. Instead of accurately determining whether an element is the cause of an outcome, this fallacy allows people to resort in incorrect conclusions. Fallacy of a single cause typically leads to a myriad of false claims and accusations. While there are instances when a sequence of events is a direct sign of causation, this is not an absolute rule to go by.

~Fallacy of a Single Cause Definition

The media, politics, and social justice is littered with straw men and causal reductionism, because it serves their purposes to create talking points for the unquestioning masses to repeat and defend.  They also seek to reinforce people’s identity of being a good and decent person around these false straw men and reductionist arguments, for people do not like to think of themselves as bad, bigoted, misogynistic, racist, selfish, or fascist.  This gives them an emotional reason (among many emotional reasons) to defend the mainstream narrative’s straw men and reductionist arguments.  Other fallacies that tie into this agenda and mindset, as a means of furthering and reinforcing it, are the “proof by assertion fallacy” (Hitler’s ‘big lie’), the poisoning the well fallacy, an appeal to emotion, an appeal to force (might makes right, shouting down, intimidation, and argumentum ad baculum), and the “bandwagon fallacy” (appeal to the popularity of a belief or assertion).