You are here: Home » Logic » Is Spirituality Logical? Why we Encourage Process Work

This blog post was inspired by an interaction on Facebook, one that is probably all too common, where a dissenter believes that spirituality and logic are mutually exclusive ideas.  Here is a screenshot of the interaction, her name was removed to protect her privacy: 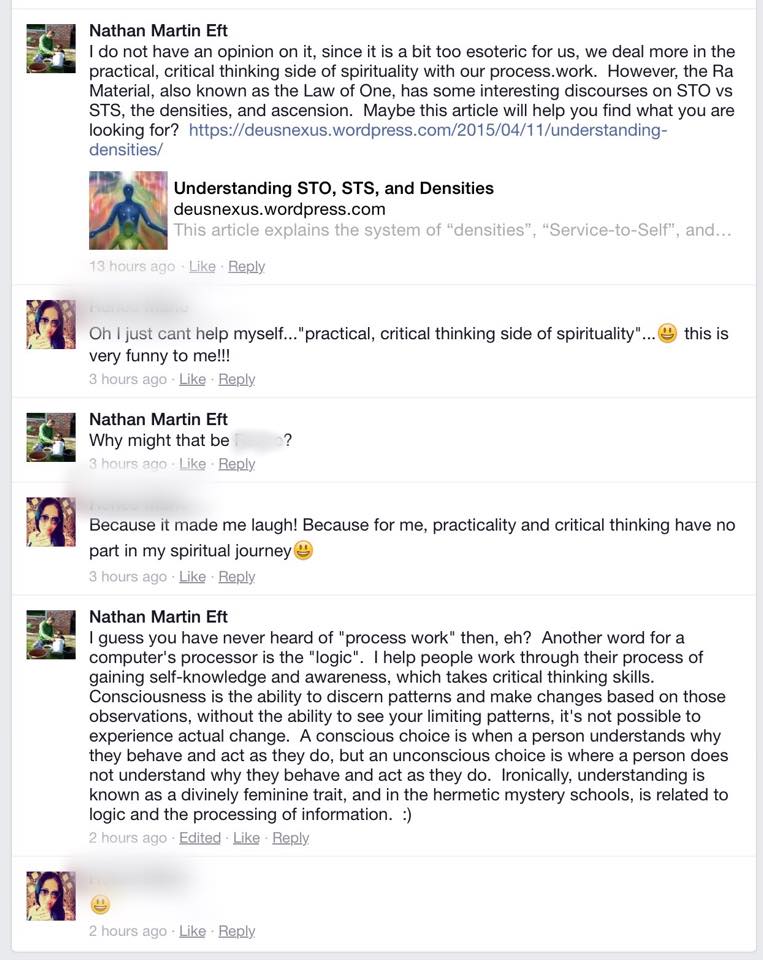 The following is my reply to anybody that believes that logic and spirituality are incompatible, loosely based on my reply above:

Have you heard of the term “process work”? Another word for a computer’s processor is “logic”, as it processes the information inputted into it in order to output results onto the screen, a printer, an email, book, movie, etc. Aline and I help people work through their process of gaining self-knowledge and awareness, through examining their feelings, triggers, and shadow side; and this process requires critical thinking skills. Consciousness is the ability to discern patterns and make changes based on those observations, without the ability to see your limiting patterns, it’s not possible to experience actual change. A conscious choice is when a person understands why they behave and act as they do, but an unconscious choice is where a person does not understand why they behave and act as they do.

Within the mystical traditions and hermetic mystery schools, understanding is known as a divinely feminine trait, and is related to logic and the processing of information. Logic, process work, and understanding are connected to the question “why”, as their answers give reasons that substantiate any and all assertions, rights, and truth. Any supposed truth that does not have sound logic and reasoning is fallacious, which comes from the Latin root word “fallere”, and means to “deceive”; logical fallacies are deceptions that are in opposition to the truth, and are thus lies.

In this way, logic,  process work, and understanding are mandatory to any spiritual practice that seeks to experience and align the Self with the truth, and assists the individual in raising their self-knowledge, consciousness, and self-awareness. Any so-called spiritual path that does not place value on logic, critical thinking skills, and asking “why” questions, does not place value on the truth or the Divine feminine, and is therefore also a lie. Dressing this lie up in sheep’s clothing may make it appear outwardly sweet and modest, but at its core, it’s just another seduction intended to drain people’s personal power, and trick them into abdicating their sovereignty.

One Response to “Is Spirituality Logical? Why we Encourage Process Work”