You are here: Home » Logic » The Two Types of “Persons”

According to Blacks Law Dictionary, 2nd Edition, 1910, there are two types of “persons”, artificial and natural. Those who identify with an ideology, aka an ideologue, are an artificial person, and those who have done the self-reflection and inner work necessary to emancipate themselves from unnatural ideologies and systems are natural persons.

We’re either subject to the law of reason (natural law), or to the laws of men; it’s our choice. ~Nathan & Aline

I behave reasonably with reasonable, natural persons, but I am under no obligation to be reasonable with artificial persons who are merely representing the policy of their policy makers, as they forfeited both their will and reason over to their ideology. 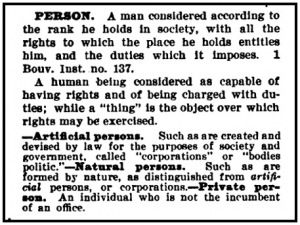 This interpretation aligns with the Papal Bull of 1302 which outlined two different types of persons, called the “spiritual man” and the “human creature”, where the spiritual man is beyond the reach of Canon Law (a variation of Roman Civil Law) because they’ve chosen to subject themselves to the law of nature/reason/God, while human creatures are still subject to the Roman Pontiff, the Church, and their laws. To be considered a natural/spiritual man, one must emancipate themselves from the subjective dictates of Roman Civil Law through subjecting themselves to the objective laws of nature and reason. 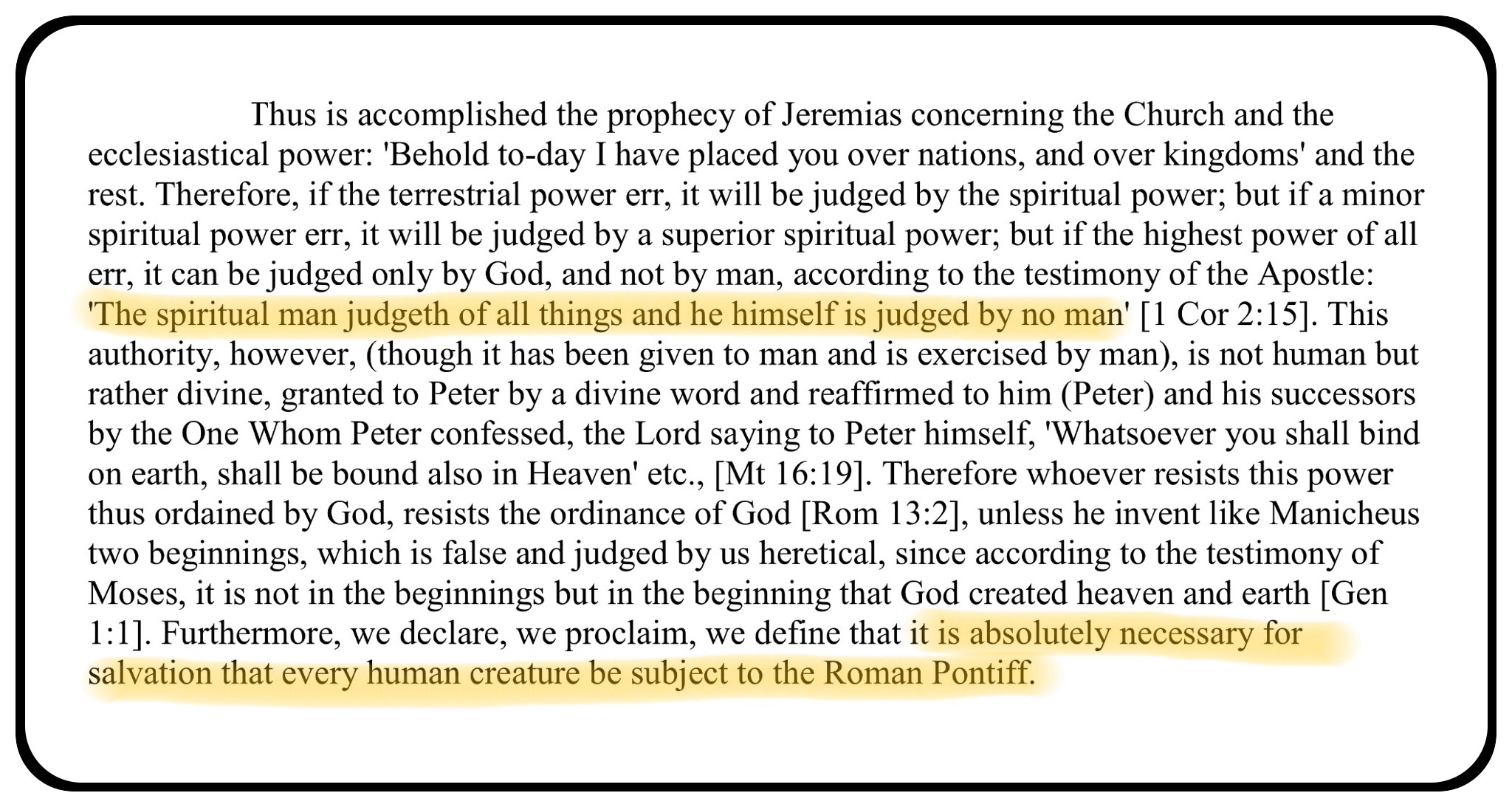 Carl Jung called this individuating oneself from out of the collective unconscious, while the Book of Revelation alluded to this when it stated in chapter 18 verse 4, “come out of her, my people, lest you take part in her sins, lest you share in her plagues.” Such plagues and punishments are simply the natural consequences of forfeiting ones will, reason, and rights over to others, rather than taking personal responsibility through subjecting oneself to the law of reason.

Most people have failed to challenge the underlying assumptions in their society; they have not thought on nor reflected about why things are as they are, nor have they taken responsibility for their feelings and processed their emotional upsets using their intellect, which is necessary to develop their emotional intelligence. I consider myself a reasonable person, and unlike ideologues, I am not possessed by ideas, nor subject to them, I’m only subject to reason itself―since I constantly reflect on ideas and challenge them within my own thinking, and work through my emotional upsets using reason when they arise. Ideologues on the other hand are not self-reflective, nor are they reasonable, but instead they’re possessed by their ideas, and enforce them with all manner of judgmentalness, rationalizations, and violence.

It becomes apparent to me that an ideologue is like an unofficial policy enforcer. Enforcers have no power to freely discuss or interpret policy; they are subject to that policy and only act as an agent of the creator of that policy. This means they have suspended their own reason and will in allegiance to the policy or ideology. They are not being morally responsible in their engagements either; they have abdicated their own moral character and submitted it to the policy or ideology. They, themselves, in effect, are not even present; they are merely representing the policy or ideology—and most often do not even recognize this fact. ~Erik Feist 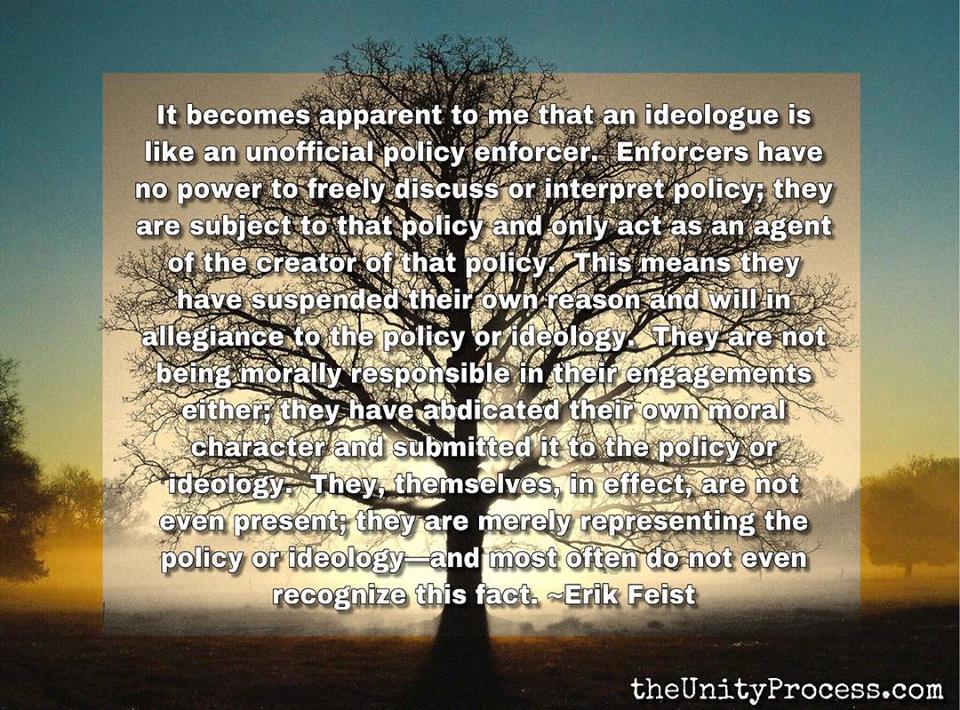 It may be easier to think of an artificial person as something like Agent Smith from the Matrix Trilogy; a self-replicating mental virus that takes over those who lack a will of their own (and after taking over another lost soul, says #metoo). It would be pointless for Neo to attempt to win over an agent of the Matrix, as they’re just acting on behalf of their ideological overlords via their pre-programmed responses (although there are some initial benefits to one’s own self-awareness that comes from facing down an ideologue in an argument).

While there are two types of persons defined by law, the artificial and the natural, very few are polarized as one or the other (although there are a growing number of artificial persons as more and more forfeit their will and reason), and are somewhere in between the two.  The first boundary and distinction we should make is between these two person types, and we must realize that we aren’t obligated to reason with those who have fully chosen to forfeit their will and reason over to an ideology.

However, the next boundary should be in relationship to those who invite in ideologues into our space, and then get upset at us when we treat artificial persons as artificial persons. Our boundary should be on these “middle men”, and then they can decide whether or not to set a boundary on the artificial persons they’ve been inviting into their lives.  They must decide whether or not they will choose to become more natural like us, or if they will continue protecting artificial persons (ideologues), and their empty ideologies. We cannot be open and vulnerable to collaborative thinking if these “middle men” continue to throw us under the bus whenever an unreasonable ideologue comes along; it’s just not safe for us, and not conducive to our practicing self-care.  Will they choose to throw reasonable people under the bus, or will they subject themselves to, and stay loyal to, the law of reason?

I will not be open, vulnerable, or collaborative with those who do not respect me enough to defend me when I am in a confrontation with judgmental, unreasonable, and argumentative people. If they will defend the unreasonable above the reasonable, they are not worthy of my time, vulnerability, or collaboration. ‬

It is important to realize that we need to set this on ourselves as well, as we may find an area of our lives where we have thrown more reasonable people under the bus to protect our emotional attachments.  We must remove the speck from our own eye, prior to removing the plank from our neighbors eye. 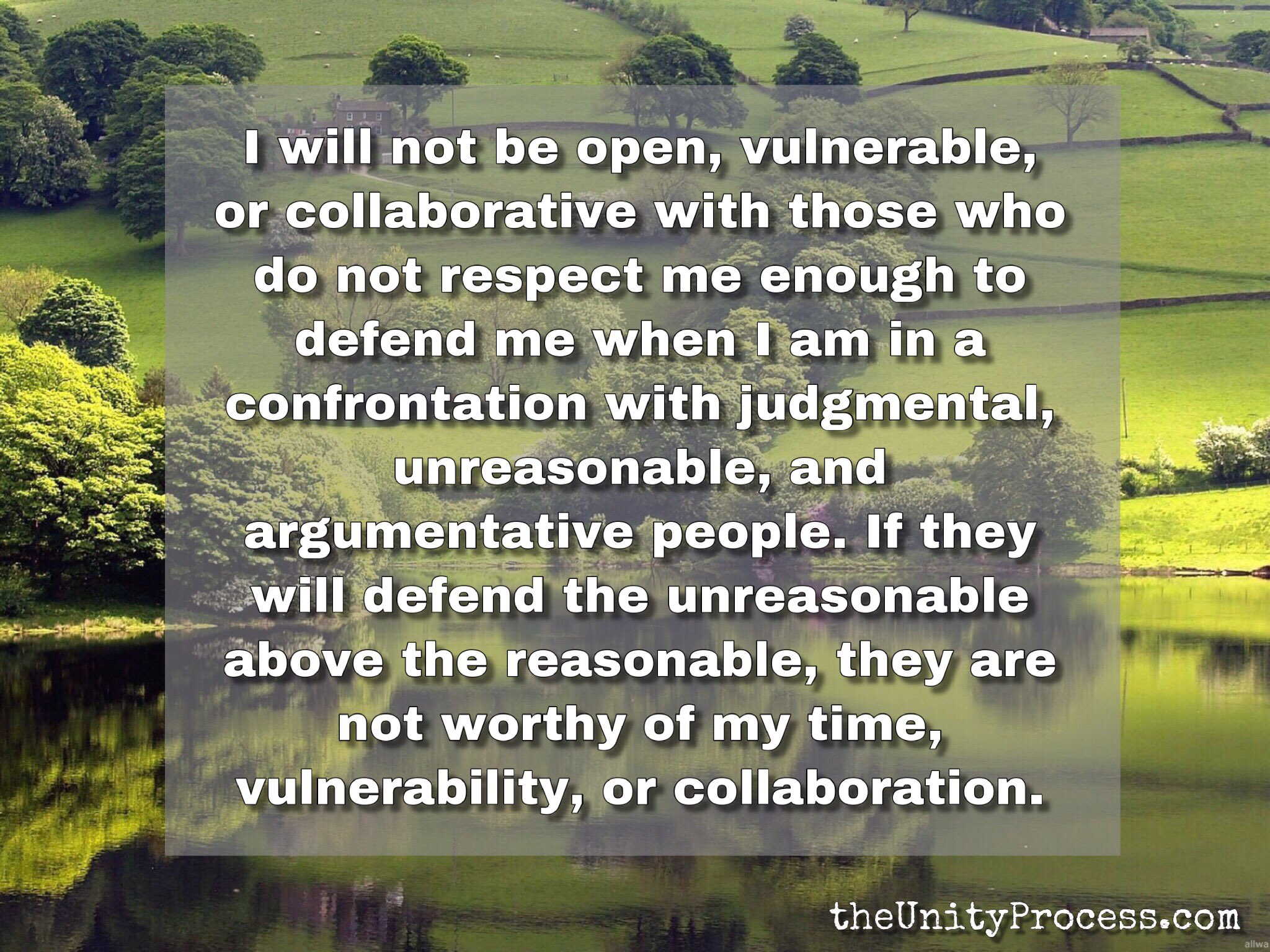