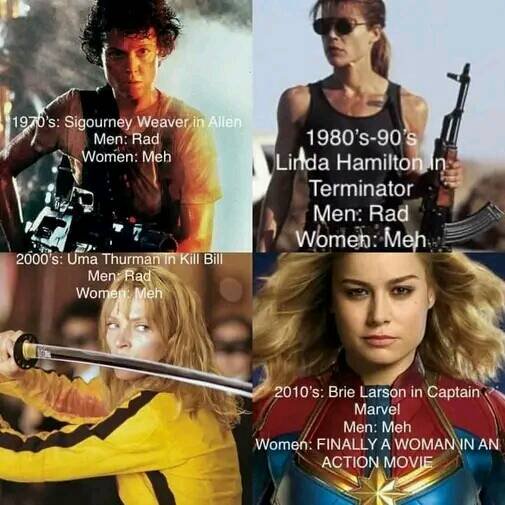 This (the above meme) is because the weak writers of newer projects are projecting their own desire to be powerful, liked, smart, and successful, among other things., onto their characters, rather than creating characters and then developing them. Instead of allowing their characters to go on a hero’s journey and develop from a flawed individual into the triumphant hero, they go on a toxically low self image, envious, and narcissistic power trip with their characters, and let their characters do and experience everything they wish they could be and do from start to finish. It’s a bizarre on-screen schadenfreude where they defeat cartoonish straw men of those who they perceive are more powerful and better than they are, as they are vicariously living through their overpowered and perfect characters, and then they gloat and are self-congratulatory about the straw men they so “bravely” defeated.

Those who own the media, big tech and social media, government, educational systems, most politicians, corporations, banks, and the entertainment industry have, in a coordinated manner, demonized the masculine principle in males calling it toxic, and idealized the masculine principle in females calling it stunning and brave. It’s a super sneaky switcharoo of the people’s perceptions that has confused their identities and neutralized the effectiveness that comes from the masculine in males and the feminine in females working harmoniously together. A population with a weak psychological identity is much easier to manipulate and herd in whatever direction that benefits those pulling the strings. In case one questions this grand conspiracy to manipulate the perceptions of the masses, below are a few quotes from prominent individuals in the know who disagree with you.

EDIT: I was blocked from posting the quotes/memes by FB, as they called me a spammer, and in the second instance where I tried again, they said that a link I shared was against community guidelines, however, I hadn’t even shared a link. They did not give me a way to rebut their false grievance against me either. So I am now sharing it to my blog instead. 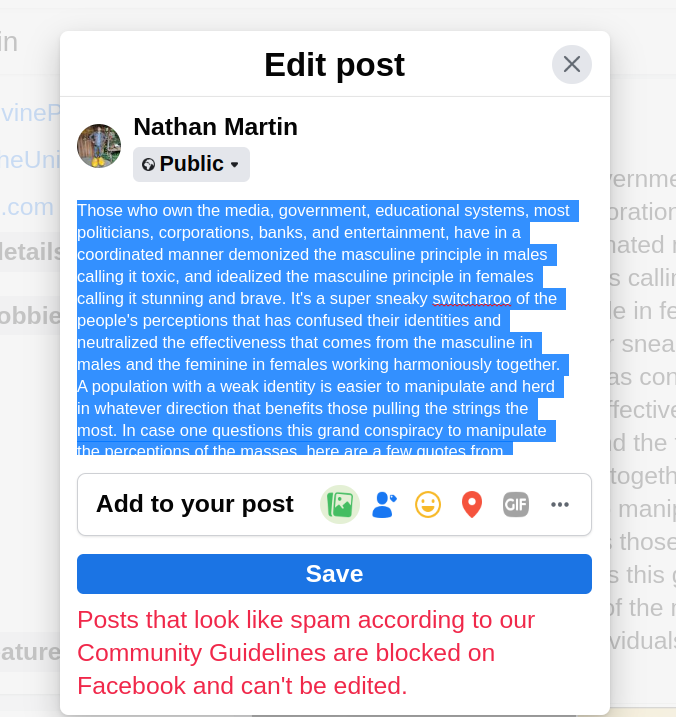 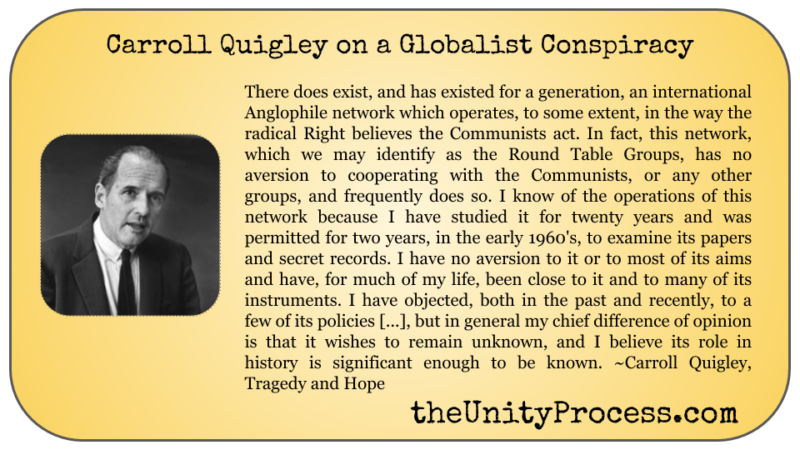 There does exist, and has existed for a generation, an international Anglophile network which operates, to some extent, in the way the radical Right believes the Communists act. In fact, this network, which we may identify as the Round Table Groups, has no aversion to cooperating with the Communists, or any other groups, and frequently does so. I know of the operations of this network because I have studied it for twenty years and was permitted for two years, in the early 1960’s, to examine its papers and secret records. I have no aversion to it or to most of its aims and have, for much of my life, been close to it and to many of its instruments. I have objected, both in the past and recently, to a few of its policies […], but in general my chief difference of opinion is that it wishes to remain unknown, and I believe its role in history is significant enough to be known. ~Carroll Quigley, Tragedy and Hope

The highest art of warfare is not to fight at all but to subvert anything of value in the country of your enemy until such time that the perception of reality of your enemy is screwed up to such an extent that he does not perceive you as an enemy. ~Yuri Bezmenov, former KGB Agent 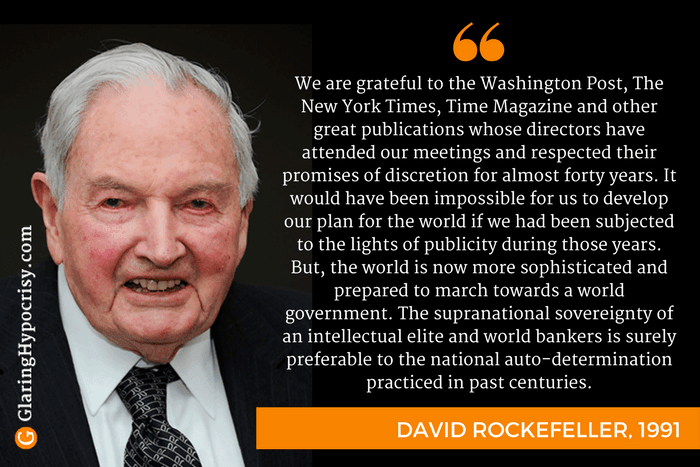 We are grateful to The Washington Post, The New York Times, Time magazine and other great publications whose directors have attended our meetings and respected their promises of discretion for almost forty years. … It would have been impossible for us to develop our plan for the world if we had been subject to the bright lights of publicity during those years. But, the world is now much more sophisticated and prepared to march towards a world government. The supranational sovereignty of an intellectual elite and world bankers is surely preferable to the national auto-determination practiced in past centuries. ~David Rockefeller, 1991 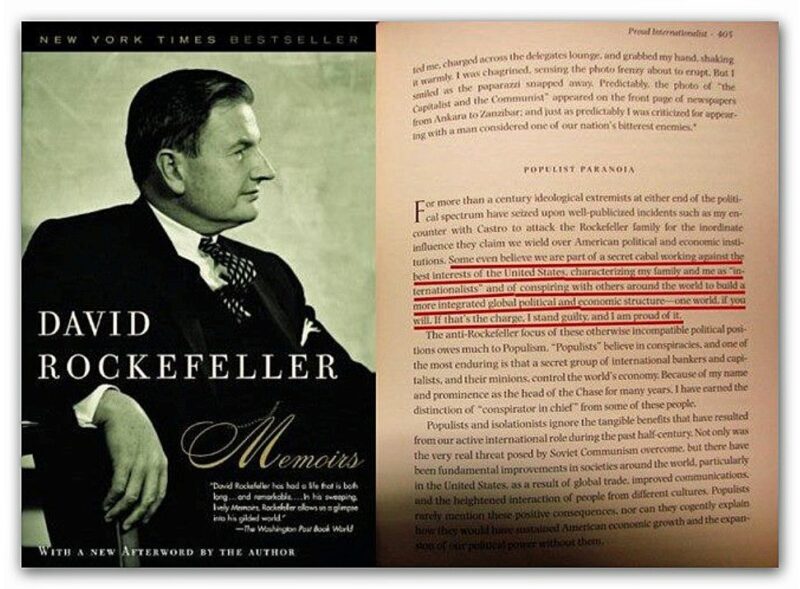 Some even believe we (the Rockefeller family) are part of a secret cabal working against the best interests of the United States, characterizing my family and me as ‘internationalists’ and of conspiring with others around the world to build a more integrated global political and economic structure – one world, if you will. If that’s the charge, I stand guilty, and I am proud of it. ~David Rockefeller, “Memoirs” 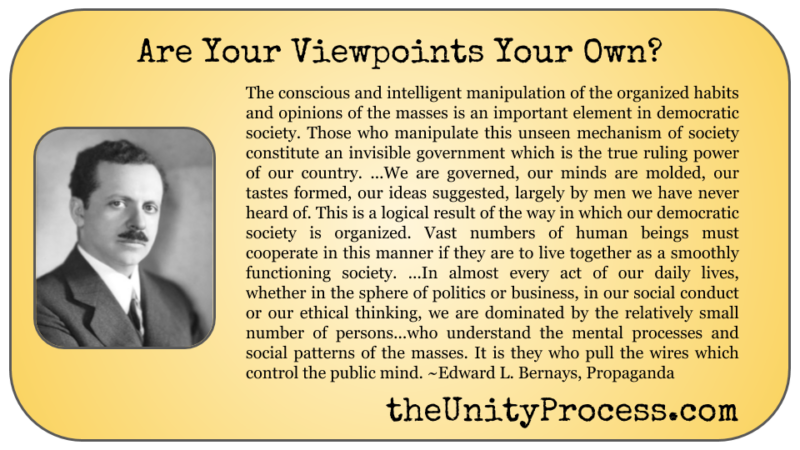 The conscious and intelligent manipulation of the organized habits and opinions of the masses is an important element in democratic society. Those who manipulate this unseen mechanism of society constitute an invisible government which is the true ruling power of our country. …We are governed, our minds are molded, our tastes formed, our ideas suggested, largely by men we have never heard of. This is a logical result of the way in which our democratic society is organized. Vast numbers of human beings must cooperate in this manner if they are to live together as a smoothly functioning society. …In almost every act of our daily lives, whether in the sphere of politics or business, in our social conduct or our ethical thinking, we are dominated by the relatively small number of persons…who understand the mental processes and social patterns of the masses. It is they who pull the wires which control the public mind. ~Edward Bernays, “Propaganda”

No serious sociologist any longer believes that the voice of the people expresses any divine or specially wise and lofty idea. The voice of the people expresses the mind of the people, and that mind is made up for it by the group leaders in whom it believes and by those persons who understand the manipulation of public opinion. It is composed of inherited prejudices and symbols and clichés and verbal formulas supplied to them by the leaders. ~Edward Bernays, “Propaganda” The whole aim of practical politics is to keep the populace alarmed (and hence clamorous to be led to safety) by an endless series of hobgoblins, most of them imaginary. ~H.L. Mencken, “In Defense of Women” 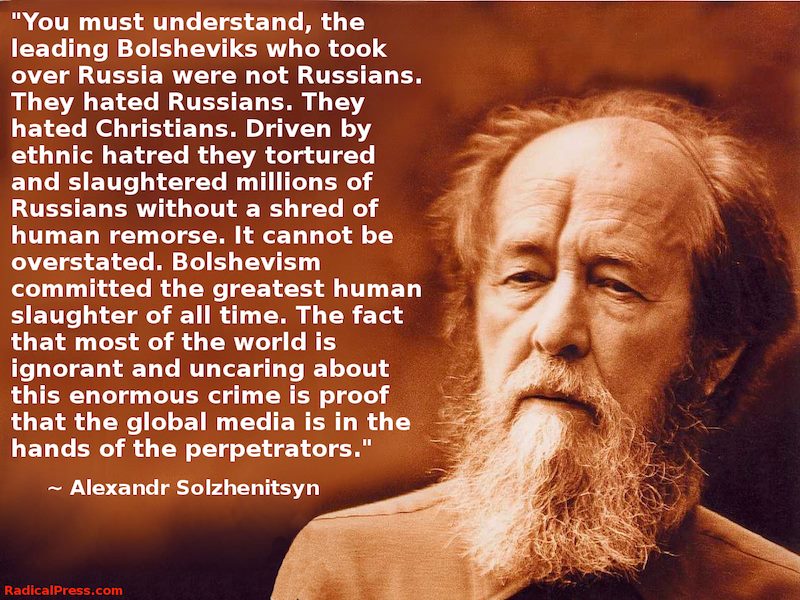 You must understand, the leading Bolsheviks who took over Russia were not Russians. They hated Russians. They hated Christians. Driven by ethnic hatred they tortured and slaughtered millions of Russians without a shred of human remorse. It cannot be overstated. Bolshevism committed the greatest human slaughter of all time. The fact that most of the world is ignorant and uncaring about this enormous crime is proof that the global media is in the hands of the perpetrators. ~Aleksandr Solzhenitsyn 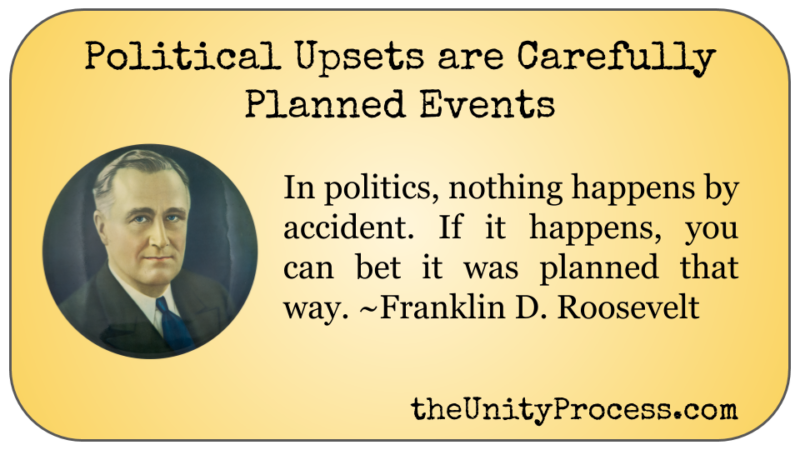 In politics, nothing happens by accident. If it happens, you can bet it was planned that way. ~Franklin D. Roosevelt