You are here: Home » Alchemy » Reality Generation and True Healing

Healing is not the ability to clear away pain, as pain is merely an effect that provides feedback about the wound. Even the wound that is the source of the pain has a root though, as it too is a result of an initial trauma that caused it. Healing is following the message of the pain back to the wound where it originates from, examining the wound, and then following that back to the originating trauma, and then integrating and neutralizing the root traumas on the causal plane. Healing is knowing and understanding your wound’s root causes, in order to make key changes to them; it is not done via addressing the wound or its symptoms as a cause, although pain and wounds can still be addressed as effects.

While manifestations are not a cause of anything, they can provide feedback to the Observer (Higher Self), who can then make changes to the originating thought patterns and feelings, thus allowing for different manifestations (effects). The ability to master the sixth Hermetic principle of Cause and effect in the chain of reality generation of thoughts, feelings, and manifestations is how alchemists are able to transmute the lower to the higher. 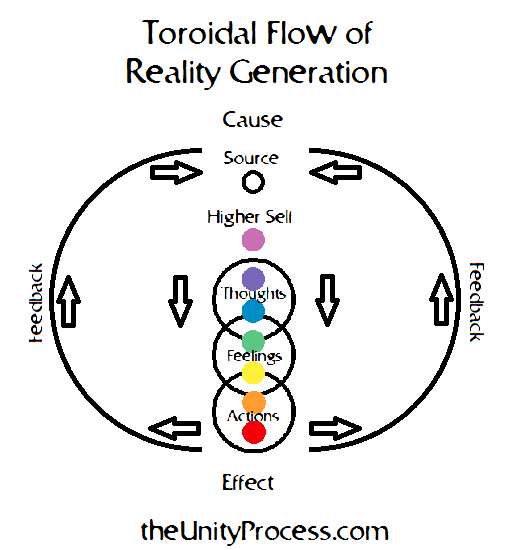 From what we can tell from how most “healers” operate right now, including the majority of light workers, is that they utilize the manifested plane of effects to make changes on the causal plane of thoughts and feelings, which to our understanding is the logical fallacies of Wrong Direction and Reverse Causation.

Wrong direction is an informal fallacy of questionable cause where cause and effect are reversed. The cause is said to be the effect and vice versa.

For instance, the statement:

Driving a wheelchair is dangerous, because most people who drive them have had an accident. ~Wikipedia, Wrong Direction

B causes A (reverse causation)

Example:
The faster windmills are observed to rotate, the more wind is observed to be.
Therefore wind is caused by the rotation of windmills. (Or, simply put: windmills, as their name indicates, are machines used to produce wind.) ~Wikipedia, Reverse Causation

While effects most certainly give us feedback, we do not see how they are able to create change in the originating root causes, as it is illogical to think that we can glue feathers to ourselves to make us feel closer to nature, nor can we cross-dress to balance our masculine or feminine. As our observer Higher Self, we must reverse back up the chain of causation by noticing any patterns in our manifestations, to then notice any patterns in our feelings, and to finally go up yet another layer to find, neutralize, and change the root thought patterns (programs) that caused both our feelings and manifestations in the first place.  Using the plane of effects to change our manifestations, in order to get new results is manipulation, whereas changing our thoughts on the causal plane is true healing.  Are you a manipulator, or a healer?