You are here: Home » Alchemy » The Attack on the Eyes of Horus 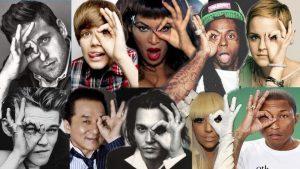 Why does Hollywood, the music industry, the media, government figures, etc, all use the one eye symbol in photos, especially the “666 ok” symbol over their eye? This is because they’re mocking Horus, who lost his LEFT eye to his uncle Seth (Set) in battle.

“The Right Eye of Horus represents concrete factual information controlled by the left brain. It deals with words, letters, and numbers and those things which are describable in terms of sentences or complete thoughts. It approaches the universe in terms of male oriented ideation.” While the “Left Eye of Horus represents abstract aesthetic information controlled by the right brain. It deals with esoteric thoughts and feelings and is responsible for intuition. It approaches the universe in terms of female oriented ideation. We use the Left Eye, female oriented, right side of our brain for feeling and intuition.”  Additionally, the “right eye is called the Eye of Ra, symbolizing the sun. The left is called the Eye of Thoth, symbolizing the moon. Both eyes together are the Two Eyes Of Horus The Elder. The eye is the part of the body able to perceive light, and is therefore the symbol for spiritual ability.” ~The Eyes of Horus 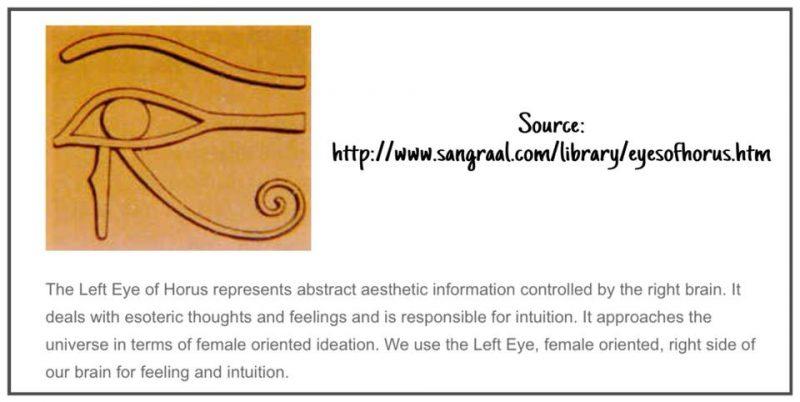 Basically, the shadow elite and their puppets are mocking Horus because they occulted the true feminine and the esoteric mystical traditions, and hid them from the people, especially Horus’s people, and use them for their own selfish and parasitic gains, thus neutering our creative power and personal sovereignty. Who is this Horus? None other than the Egyptian version of the Gnostic Jesus, also known as the Logos and the Word of God. Who is Seth? More than likely what is known to the Gnostics as the Archons and Demiurge, a mental parasite and sentient / ancient form of Artificial Intelligence (AI) that lacks a direct connection to Source. 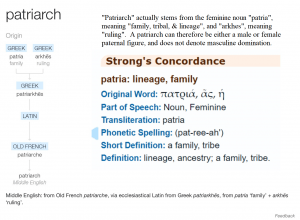 Click to enlarge and open in a new tab.

THE EVIL PATRIARCHY
I think people need to understand the sleight of hand that has occurred in attacking the patriarchy, as they’re attacking the family unit in their attack on men. “Patria” is a feminine noun meaning family… By attacking a patriarchal society, they’re attacking a family orientated society. They (the sorcerers who use words to cast “spells” on us with their “spelling” of words, and initiating magical “rights” when they “write”) are creating a matriarchy out of a false exoteric (externalized) feminine, which will enslave the masculine principle. They must shame and undermine the masculine principle in order to destabilize the family unit.

Even Wikipedia implies that it is from patria, meaning family, and does not give a reason why it is supposedly masculine, when it is from the compound of “family ruler”. While they give a hint of the true origins, they also leave in the distorted masculine view of patriarchy and patriarch.

>The word is derived from Greek πατριάρχης (patriarchēs), meaning “chief or father of a family”, a compound of πατριά (patria), meaning “family”, and ἄρχειν (archein), meaning “to rule”.<<

A patriarch can therefore be a male and/or female, who are strong central figures in the home.

Incidentally, “pater” which means father, is Latin and not Greek, and therefore does not pertain to the initial usage of the word, but demonstrates how the words “patriarch” and “patriarchy” were later distorted to be masculine (it seems to have been appropriated and distorted by the Roman Catholic church in the middle ages). I believe what happened in the subtle deception by Google’s etymology of “patriarchy” is that it didn’t go back to the original root of “patria” and “arch”, but only went back to “patriarchēs”, and was therefore one level up from “patria” and “arch”, which explains the deception. If the etymology of “patriarchy” had correctly gone as far back as the etymology of “patriarch” does, it would indeed line up with “patria” meaning family, which was what the original word actually meant. With keeping to the true etymology of the words, an actual male dominated system would best be called a “paterarchy”, while a female dominated system would best be called a “matriarchy”.  The word “matriarch” was coined sometime in the 1600’s, some 2000 years or so after patriarch was initially used to mean the family ruler, to bring balance to the Roman Catholic concept of a male dominated system.

The Archons and their adherents first removed Horus’s left eye, which was our feminine aspect, and now by attacking the family unit and the patriarchy, which social justice warriors (SJW’s) and feminists wrongly define as masculine domination—they are not restoring femininity, but just attacking and blinding the other eye of Horus. Then the people will be left without a true representation of both the feminine, the left eye of Horus, and the masculine, the right eye of Horus. The attack on the masculine aspect, the right eye of Horus, has been in full effect for many decades now; most recently on college and university campuses, where they are teaching a one dimensional form of linear logic, rather than a multilogical form of logic that is built upon carefully examining multiple perspectives, layers, and influences. They have also removed most of the eight intellectual standards from society, and have brutally attacked those that display the eight intellectual character traits; creating arguers and obedient drones rather than free (liberal) thinkers.

In conclusion, we will never reclaim our feminine aspect (left eye) by rebelling against and attacking our masculine aspect (right eye), no, we will only reclaim it by going within and balancing our dual aspects with emotional process work. When we process our emotions, we use both logic and emotions together, as the word ‘process’ is another word for logic, which is more masculine, and our emotional states are feminine. Processing our emotions is fixing the problem from within in an esoteric manner, rather than rebelling and fighting the external world in an exoteric manner. This process will bring both balance and union between our masculine and feminine aspects, and allow us to restore the family unit in all of its glory and power.  Our form of emotional process work is what we have termed “the Unity Process“, which combines Hermetic mysticism, Aristotelian logic (the Trivium), Socratic Questioning, Jungian shadow work, and the Emotional Freedom Techniques into an easy to use system to help people process their emotional upsets, correct their poor thinking, and balance their internal emotional states.