You are here: Home » Critical Thinking » The Core of Argumentativeness: Confirmation Bias and Motivated Reasoning

It has become painfully obvious to me that many people are unable to get past their confirmation bias and motivated reasoning enough on emotionally charged topics to actually read and comprehend what has been presented by fair minded thinkers. They will bypass around fair minded information, even if it clearly addresses their concerns, because they perceive that it conflicts with their biases — and skip straight to arguing against points that were never made. If it does not line up with their black and white understanding of an issue that they received from a politically polarizing talking point and media conditioning, then it is obviously the opposite of their belief, and not a third, fourth, or even a fifth possibility that they have never considered before.

Yes, between the extremes of 1 and 10 lies 2 through 9; it is an important skill to be able to to consider possibilities 1 through 10, and not just 1 and 10. For example, if they hold possibility 1 as their belief, and I come in with possibility 5, they will argue with me as if I just stated the position of possibility 10; to them, all possibilities that are not possibility 1 are possibility 10. In today’s age where people are unconscious of their biases and prone to emotionally motivated reasoning, it is very easy for predatory groups to manipulate their one dimensional thinking with false dilemmas.

Fair mindedness in the face of emotionally charged extremes requires intellectual courage and other intellectual character traits. Will you stand up and exercise this rare intellectual trait with me? 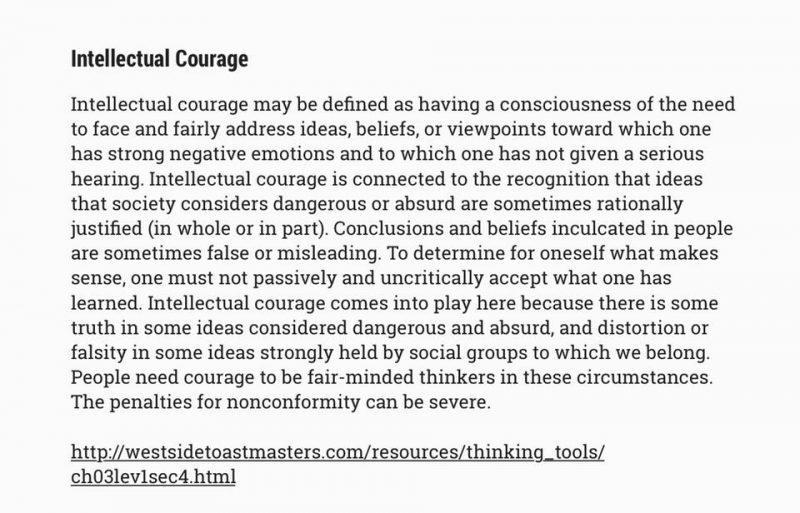 Humans are subject to confirmation bias, and they are also subject to motivated reasoning. The only way we know of to overcome biases, emotional attachments, and faulty reasoning is through a life dedicated to training the mind to think properly. First and foremost, this requires the ability to turn our thinking inwards upon itself, to examine our thinking with our thinking in self-reflection, and to develop intellectual standards in our thinking, while also developing the beneficial intellectual character traits. Secondly, it requires that we learn how to process our feelings when emotional upsets arise, and remove the emotional attachments that our biases and limiting beliefs are built upon. 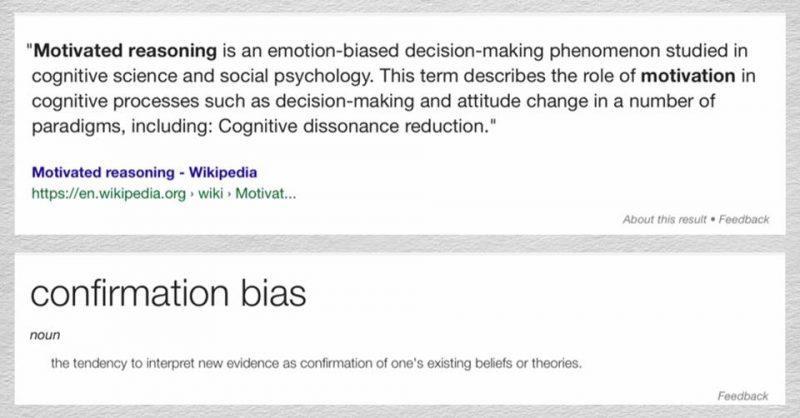 Q: How biased and emotionally attached are you? How much value have you placed on working through your emotions, and the mental patterns that cause them?

I find it ironic that many people will use their so-called education in a certain subject to attack another person’s reasoning, when they’re clearly angry and upset. Their anger betrays their state of mind and ignorance though, since anger is the main contributing indicator and condition necessary for “motivated reasoning”. This form of reasoning bypasses the cognitive regions of one’s brain, and instead operates in the punishment and rewards center of their brain. So while these people may think that they are standing for rationality, they’re actually behaving in an irrational and emotionally charged manner.

A recent study has shown that anger is the emotion that most easily causes individuals to polarize into a “for” or “against” (black and white) dichotomy on a given topic, where they are more likely to ignore pertinent data and reasoning to support their initial stance and belief. There may also be other reasons that lie under the surface of their conscious awareness, such as a deep seeded victim mindset. The lack of emotional awareness and mastery around one’s thinking can put people at risk of having their anger manipulated by the media, political parties, advertising, religions, and governments. They then may feel victorious and relieved when their manipulators give them prepackaged solutions that rewards their emotionally charged and motivated reasoning, and ends the fabricated conflicts in their favor; this tactic is known as the Hegelian Dialectic.

Thankfully, we do not need to stay forever stuck in this easily manipulable condition, as we can learn the vital skill of processing our emotions whenever we sense ourselves acting in this manner, and free ourselves from motivated reasoning.  This will allow us to instead use actual reason in coming to our beliefs and reasoned judgments.

In order to get past our biases, emotional attachments, and motivated reasoning, it is helpful to learn how to synthesize information with conflict resolution.

Conflict resolution requires thinking that seeks to progress all parties involved, even when emotional or physical pain is involved. Unfortunately, most people only seek to stop their pain through controlling the behaviors of others, which requires them to win their conflicts, rather than synthesize their conflicts. Whereas competition and winning reinforces the separation between two parties, progression and synthesis encourages the unification of the two parties. It is important to clarify that such unification does not make two or more people the same, but rather connects them together through their shared understanding.

Additionally, synthesis does not equate to tolerance or compromise, as tolerating the viewpoints of others without exercising intellectual empathy and synthesizing both viewpoints into something higher merely reinforces their separation. Likewise, compromise forces both sides to sacrifice an aspect of their viewpoint through behavior modification, without transforming the initial conflict, or dealing with the root causes of the pain — thus both tolerance and compromise leads to suffering by ignoring the messages sent by their pain. Many people believe that meeting in the middle is intellectual synthesis, but this is fallacious, as the middle ground between the truth and a lie is still a lie.

Thankfully, all so-called dualities can be intellectually synthesized into a more robust and elevated reasoned judgment, such as pro-life and pro-choice, Christianity and homosexuality, pro guns and anti guns, and conservatives and liberals. While this can give us the hope of building a brighter future, we must first build our own capacity to exercise intellectual humility and empathy, and practice intellectual synthesis in our own families and personal lives. Only then can we finally transform our communities and world.

Motivated Reasoning is where our emotional attachments to our perspectives motivates our logic and behaviors.

See this link for a list and description of the universal intellectual standards that we can use to develop our thinking, communication, and writing skills.