You are here: Home » Alchemy » Duality, Polarity, and the False Dilemma Fallacy

“A false dilemma (also called false dichotomy, false binary, black-and-white thinking, bifurcation, denying a conjunct, the either–or fallacy, fallacy of exhaustive hypotheses, fallacy of the excluded middle, the fallacy of false choice, or the fallacy of the false alternative) is a type of informal fallacy that involves a situation in which only limited alternatives are considered, when in fact there is at least one additional option. The opposite of this fallacy is argument to moderation.”  ~Wikipedia

A false dilemma is indeed a duality, but not because the two should be one, but because an alternative option is left out and hasn’t been considered.  People often make the mistake of confusing a polarity and a duality, because they both contain two things, but a duality is oppositional, whereas a polarity is co-creative.  Polarity is one of the seven hermetic principles of natural law, which is at the core of all mystic paths; it is a foundational building block and should be considered.  Many people often make the middle ground fallacy in regards to a false dichotomy, because they reason that the middle ground between the two is the balanced perspective, but picking the middle between two lies, or even between the truth and a lie, is still a lie.

“Everything is dual; everything has poles; everything has its pair of opposites; like and unlike are the same; opposites are identical in nature, but different in degree; extremes meet; all truths are but half-truths; all paradoxes may be reconciled.” ~The Kybalion, the Fourth Hermetic Principle of Polarity

For example, north and south are two polarities that co-create a torsion field around a planet, and they are ONE through their relationship to one another.  Replace North and south with positive and negative, and you get the same principle of polarity co-creating together in an electrical current, but polarities can also work together in limited ways, such as with AC and DC current (AC is less efficient than torsion based energy, and DC is less efficient than AC energy).  A polarity is one through their relationship to one another, and requires one active polarity and one passive polarity, and if the active and passive are reversed, wrong thinking occurs.  For example, reversing the polarities of cause (active) and effect (passive) is a logical fallacy that causes a lot of confusion in people, and the same can happen with the polarity pair of questions (active) and answers (passive); many people place most of their focus the answer rather than focusing on the question, in many phases of their lives, and this causes many problems, including a susceptibility to false dichotomies. Incidentally, the principle of cause and effect is also one of the seven Hermetic principles.

DUALITY
However, a duality is a false dichotomy, such as Republican and Democrat, or the white race vs black race, and is the result of one dimensional thinking, which is called “Monological thinking”.  It is one dimensional because there are complex layers and other perspectives that must be considered, but are often overlooked by a one dimensional mindset — it is a false dichotomy because other possibilities could exist that aren’t being considered.  For example, while the left debates the right in a presidential election, the possibility of anarchy, which means “without rulers” and living as a sovereign individual, is being overlooked.  It’s not that we need another option such as the Green Party or the Libertarians, or that we need a centrist perspective between the two (middle ground fallacy), as an option is being overlooked that has nothing to do with supporting the concept of government — which is anarchy.

Feelings are often a false dichotomy with a third option that is left unconsidered.  For example, lust and jealousy are a false dichotomy when the real need and state of being that we desire to experience is satisfaction.  Greed and sacrifice are another false dichotomy, when the actual state of being we long to experience is abundance.  In each, there are two false options and one actual state of being that we wish to return to.  Emotions are usually the result of being stuck in a false dilemma in our thinking, as we are only able to consider the two false options, rather than our original state of being that the false options are a distortion of.  It is the contrast of “I feel” vs “I am”, where “I feel either lustful or jealous“, or “I am satisfied“.  Lust and jealousy are not a polarity though, as they do not co-create together in any way, but oppose one another in conflict, when a third option does indeed exist, but is being overlooked. (For more on this, please see our “Duality to Unity Feelings Wheel“.)

GENDER
In some cases, a binary or polarity has degraded into a duality, where two binaries (or polarities) are now confrontational and in contradiction to one another.  This is due to the myriad of expectations, limiting beliefs, fallacious thinking, an externalized and exoteric perception of reality, and one dimensional thinking.  For example, gender is a binary that contains the two polarities of positive and negative pole within them.  The male’s penis is representative of the positive pole that connects to the female’s vagina, which is the negative pole, and the female’s positive pole is represented by her outward facing breasts that connects to the male’s heart, which is his negative pole (see pictures below). 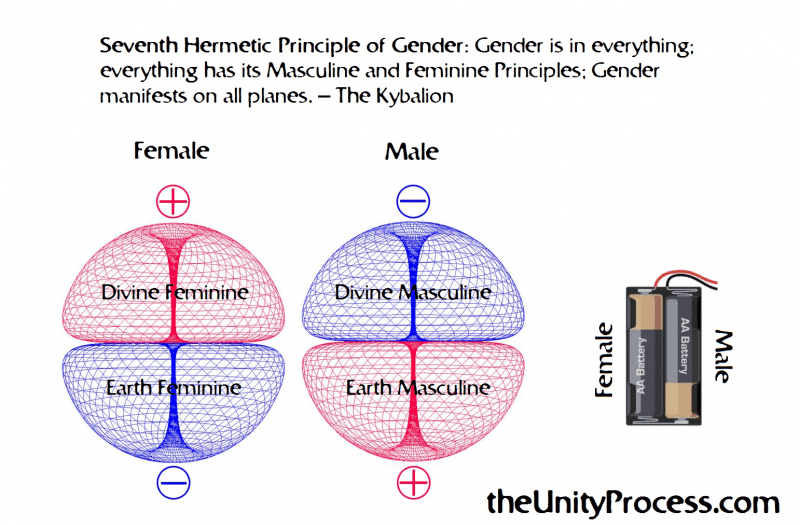 “Here is the difference between a regular polarity and the two genders: A polarity is either an active or passive side, and two polarities work together, such as the positive (+) and negative (–) poles on a magnet, but a gender is unique in that it contains both an active and passive within each gender. So in a regular polarity pair you have either a (+) OR (–), but in a gender you have both a (+) AND (–) within each. Like two Double AA batteries that are flipped, the male’s (+) is his penis, and the female’s (+) is her heart/breasts, and the male’s heart is his (–), while the woman’s vagina is her (–).” ~Nathan & Aline

Each gender must remove their contradictions and limiting beliefs to be unified to their internal other, and this requires the asking of questions, and the synthesizing of the two into One harmonious unit.  The unification of the two genders and the four energetic poles is at the heart of alchemical transformation, and requires shadow work, anima / animus work, and overall individuation from the collective unconscious into a unique individual. 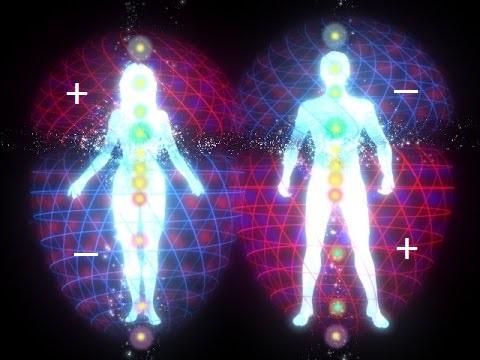 Additionally, hierarchy is intimately related to the concept of one dimensional thinking, whereas holarchy is intimately related to the concept of multilogical thinking, as it is multidimensional in its scope.  Hierarchy is more enmeshed and competitive, and it does have it’s own form of unity, while holarchy is an individuated unity, where the multiple whole parts work together as individual and equal units.  Each whole part in a holarchic unity is composed of two polarities that work together as two unique functions.  A holarchy is much more capable of synthesizing knowledge and understanding into wisdom via their multidimensional approach to thinking; it is far superior to hierarchic thinking, which requires trauma, compartmentalization, secrecy, and manipulation to thrive.

“Contrary to what we may have learned in public schools and mainstream universities, not everything must be about ideas competing in a debate, which is a conflict between two individuals’ one dimensional logic. Rather, it can be about the integration of ideas through things such as Socratic questioning, which is a multilogical dialogue between multiple viewpoints and perspectives. Competition is so ingrained in our society that it’s difficult to synthesize ideas into more rounded, objective perspectives, because each perspective must compete with other possible perspectives — it’s survival of the fittest and monological thinking. If we are true seekers, and really want to figure out the truth and not just prove our egoic opinions, then we must ask each other questions that will deepen our knowledge and understanding of what is really going on inside and around us — which is integrative and multilogical thinking. Rather than tear down all competing perspectives, multilogical discourse will build both knowledge and understanding through the synthesis of multiple perspectives; and this expansion is exactly what our world needs to truly survive—and thrive.” ~Nathan & Aline

For those who are interested, here are some articles that explore monological and multilogical thinking, duality, as well as the false dichotomy fallacy.