You are here: Home » Reality Generation » The War Against Individuality

There is a war against Individuality, and two of its main fronts are within the media and popular spiritual beliefs. They consistently put out (social engineering) the subtle lie that individuality is egocentric and selfish, but all they’ve done is hijacked the word individuality and re-branded it as egocentric and selfish; it’s a public relations stunt to make people believe that individuality is against love and unity. It’s more of their sorcerer’s word magic at play, since they know full well that it is the creative individual that is the number one nemesis of their fear based system of control and disempowerment.

The unnatural ones desperately need you to feel ashamed of your individuality so that you will willingly forfeit your creative power to them and their enslaved hive mind mentality. Their version of unity is an externally controlled hive mind, but they need you to willingly submit to their unnatural community, and no better way to accomplish this than to trick you into believing that your individuality caused all of the world’s problems. It’s a carefully crafted psyop of the highest order, to coerce you into giving away your individuality and creativity to their externalized unity! They’ve created a straw man out of the individual for you to burn, and the only option they leave you with is service to their unnatural hive, errr, “world community”.

Think of it this way, unity consciousness is an internal thing, it is inside-out, as it is the union of opposites within you to manifest creative actions. It is the union of two to create three, such as the father + mother = creation, thoughts + feelings = actions, conscious + unconscious = subconscious, and knowledge + understanding = wisdom. True unity is the three as one from the inside-out, but false unity is the removal of one, where the last two are opposing forces fighting against each other, which is also known as duality. 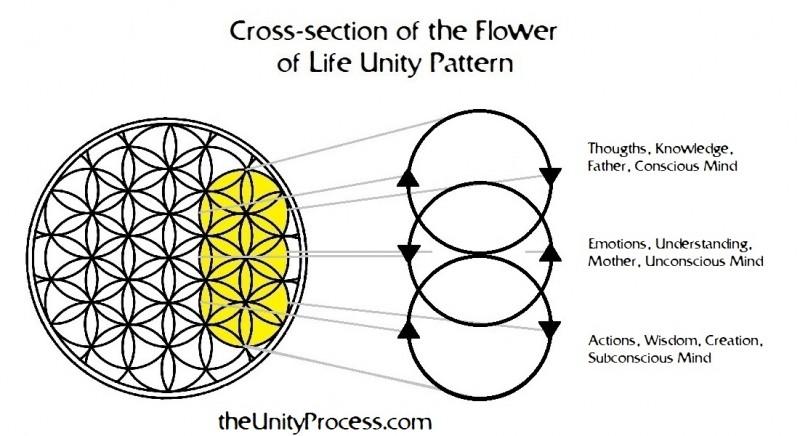 In their false version of unity, they have one of the two remaining concepts war against each other, one as the villain and the other as the hero, and then the masses team up as a hero for one side, to overthrow the villainous other side; and unfortunately, one person’s hero is the other’s villain. So in their unnatural unity, you have a bunch of emotionally fragmented and unconscious individuals externally “uniting” against each other in a perpetual binary struggle of either/or, but in the natural version, it is the three uniting as One within, harmonizing within to reflect harmony externally. Duality consciousness is quite literally expressing 1/3rd the person that a unity being is expressing, and the 1/3rd that is present is fighting a different fragmented 1/3rd of itself; it’s horribly inefficient and limiting!!!

It is the merging of the three aspects of self, in their various forms, that causes individuation, which is the goal of enlightenment, it is the peak of expressing source consciousness within this realm. An individual has found that they are One at their Source, and yet unique and differentiated in their boundaried vessels. When a person disentangles themselves from the societal unconscious soup, also known as the collective unconscious, they do so through making the unconscious-conscious, which requires integrating unresolved traumas and shadows back into the Self. One who is conscious of their shadows has thus individuated themselves out of the unconscious collective, where they are now more perfected in their individuality.

More on Unity and Individuality:

“Convincing people that “we’re all one” is done to make the masses easier to manipulate, and to herd them like sheep. However, our true power comes when we unify our fragmented and traumatized aspects of Self within, to become a whole person, intimate in relationship to Self. Such a unified being is unable to be herded or manipulated, and expresses their individual thought apart from the mass unconscious of the herd. Unconscious, enmeshed, and enslaved beings are externally unified, whereas conscious, individuated, and sovereign beings are unified within.” ~Nathan & Aline

Also, as our close friend Thomas Kutsomihas said, “they have taken a diffuse statement like ‘we are all one’ and led people to interpret it as ‘we are all one, and therefore we must all be the same’, when the true interpretation is that ‘we are all unique expressions of the same Source’”.

“Full individuation of Self, the apex of individuality, is unity consciousness, as it is the height of unique Self-expression. Unity is not losing yourself into a mass blob of consciousness, it is individuating your Self from it.” ~Nathan & Aline

“Union is not a collection of people working together towards a common cause, but the harmonious balance of thoughts, emotions, and body working together as One mind within an individual. Union is the conscious attainment of perfected individuality from out of the collective unconscious of humanity.” ~Nathan & Aline

4 Responses to “The War Against Individuality”