You are here: Home » Critical Thinking » Why Is it Important to Avoid Compromise? 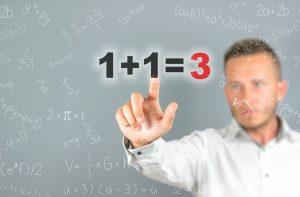 The notion that balance can be found in any given issue by meeting in the middle is the “middle ground logical fallacy”; after all, if one position does happen to be the truth, and the other is a lie, the middle ground between them is also therefore a lie. When it comes to the truth, we are under no obligation to compromise with lies, no matter how noble, wise, or good they may outwardly appear to be. (For example, if I say that 2 + 2 = 4, and another person says that 2 + 2 = 6, but we meet in the middle by saying 5 is our compromise answer, it is the middle ground fallacy.) ~Nathan & Aline

An example of a lie is a deception, which is the root meaning for the word “Fallacy” (fallere), as a deception in logic brings down the overall quality of a person’s thinking. Hidden, impartial, or incorrect information is also an aspect of a lie, while contradictions between information and/or logic is also a lie.

We must improve our quality of thinking in all of its phases to improve our ability to align with the truth, because as you can see, not everyone’s subjective truth is built upon the same foundation of sound thinking.

A person who has been conditioned into obedience does not have the same capacity to make wise choices as somebody who was raised in a family that encouraged asking a lot of questions. In such situations, the latter person’s opinions and courses of action will be much more reasonable, and meeting in the middle ground between the first and second person would be folly. Those who are able to think in an emotionally sound manner should never meet in the middle with those who are unable to think critically free from emotional attachments, as the thinker will degrade and lower their own capacity to thrive when they do so. It is incumbent on those who aren’t as able to think to raise the overall quality of their thinking, and to bring it into alignment with the objective truth.

Rather than compromising with others as a means of solving our problems, we suggest that it is important to work the process and ask questions together.  Work through the possible poor information, work through the holes in logic, and remove the possible contradictions.  If the ignorant do not wish to process with us, or are incapable, then it is important to work through our own feelings on the matter alone or with a close friend who is capable.  When we do not lower ourselves, we may often lose those we love, but we will inevitably deepen our own ties to our individuality and sovereignty when we stay true to our inner process.