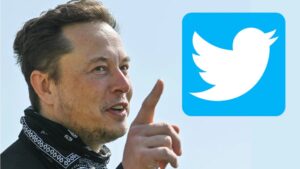 With Elon Musk’s recent purchase of Twitter, he has been thrust from a boy wonder to billionaire philanthropist here to save free speech from the clutches of evil leftist demagogues. From around 2012 or so, with the election of Barack Obama as the president of the United States, Western culture, including countries in Europe, New Zealand, and Australia, have made a drastic hard turn to the far totalitarian left. While identity politics has been infiltrating our culture through media, entertainment, education, and progressivism for many, many years, the mask of love and light came off to show their true Marxist underbelly—reaching its peak with the so-called 2020 “pandemic”. Since the 2020 US presidential election, the cultural pendulum swing from the far left began racing back to the right, and now we find ourselves with the hero Elon Musk to usher in a new era of “Libertarian” free speech.

The hard swing to the political left was an intentional means of catapulting the greatest number of people back to the political right, for reasons I will now address. First, it is a great way to reintroduce the concept of God, and to show that the atheism of scientific materialsim (material reductionism, the underlying belief where matter causes consciousness, rather than consciousness causing matter—the reversed cause and effect fallacy) is an evil worldview that stunted scientific inquiry, and reduced humanity to nihilistic beings without any greater or higher purpose, making them ripe for a communist takeover. While of course this is somewhat true, it was initiated as a means of creating the largest Marxist/Hegelian styled dialectic the world has ever seen (that we know of), to capture as many people as humanly possible in the trap of the coming One World religion.

Second, this new found economic and political freedom will allow for humanity to go into a time of prosperity long enough to fuel the transformation necessary to create the fourth industrial revolution. The hidden overlords will loosen the reigns and open the cages for brief times throughout history to usher in controlled bursts of creative energy, thus harnessing our creative power as divine beings to create their desires. They need our creative ability due to their own inability to create (they can only tear down and destroy, as they are cutoff from the Divine will), and they also do it because of the nature of how agreements and consent works. Humanity’s creative drive is the consent necessary to usher in their Transhumanist dystopia; it’s the exact same blueprint they used to turn China into an economic juggernaut after US President Richard Nixon signed a treaty with them in the seventies. Left to their own devices, China never would have become an economic power.

It is probable that Musk represents a (if not the) key figure that will help usher in a new, albeit temporary, age of prosperity, and ultimately, the pied piper who will lead the children still tightly gripping conformity consciousness out of the village and into a dark union with AI. Pretty much everyone gets a chance at union in our final days as humanity 1.0, and while many will merge with the Logos and their higher selves into unity consciousness, the majority who refuse to do their inner work will stay in conformity consciousness and experience a dark union with artificial intelligence via Musk’s Neuralink technology, which will be facilitated by his Starlink internet capable satellite network.

Divine Union: the mystical marriage between the divine and man, where the divine’s personality (higher self) integrates into the personality of those individuals who are on the mystical path. The term is also known as god-realization, self-realization, divine marriage, and being born again. The five steps of the Divine Marriage were first introduced by St. John of the Cross, which in itself is an interesting topic of discovery. Step four of the union process is known as “the dark night of the soul”, which psychologist Carl Jung popularized with his shadow work process.

Is musk the genius behind this whole plan? Probably not, however, he is at least the figurehead and pied piper responsible for ushering a segment of humanity into their dark union with AI. His first step is to reveal / disclose to humanity much of the shenanigans the Babylonian whore system has dragged humanity through, as this will build a lot of trust between him and the masses, burn off any karma he might have accrued through his lifetime(s), and most definitely seal in the mind control by appearing as a savior of mankind. Interestingly enough, another word for “disclosure” is “apocalypse”, so we very well be experiencing the “Apocalypse of John”, also known as the Book of Revelation, in the coming seven years leading up to [UN Agenda] 2030.

It is my opinion that disclosure has begun with his purchase of Twitter, and that much more will follow. The globalists have been proven to be the fascist villains in the drama triangle, we as humanity are the so-called victims, and now he will be shown in the light as our savior, fighting off the villains and saving the day from communist tyranny. 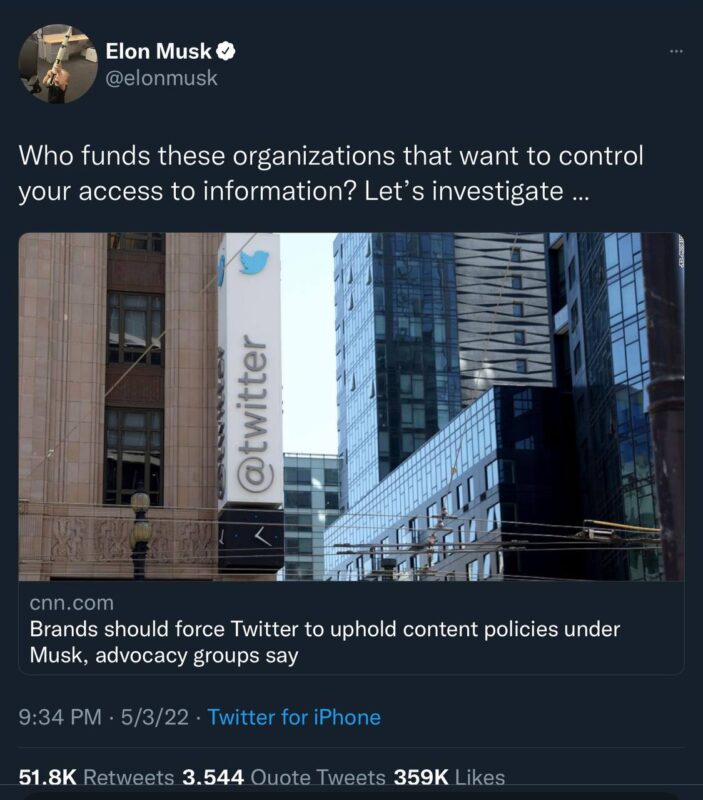 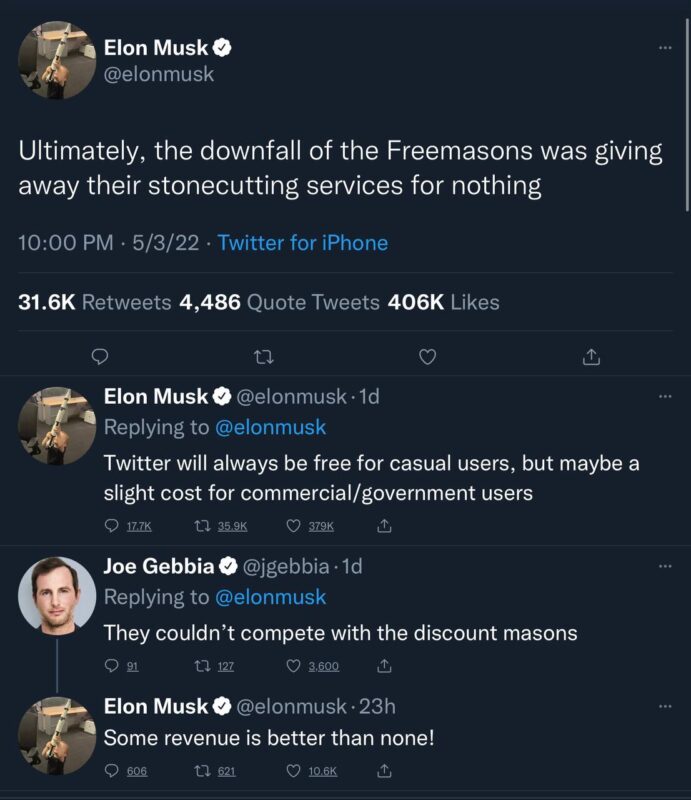 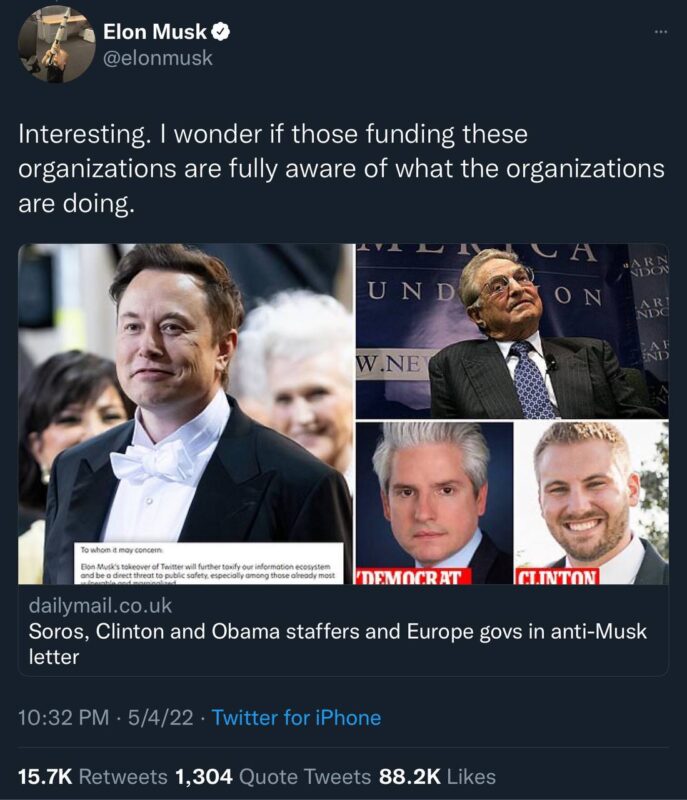 Based upon my understanding of what is going on in the world right now, Musk is now taking on his role as Lord and Savior of humanity, and will slay the Whore of Babylon. From a psychological perspective, I think that what’s happening is that many people still experience reality from Karpman’s Drama triangle of victim, perpetrator, and rescuer, or what I call victim, villain, and hero. The drama triangle is an inversion of the TED triangle of creator, challenger, and coach, and keeps people in a victim mindset. 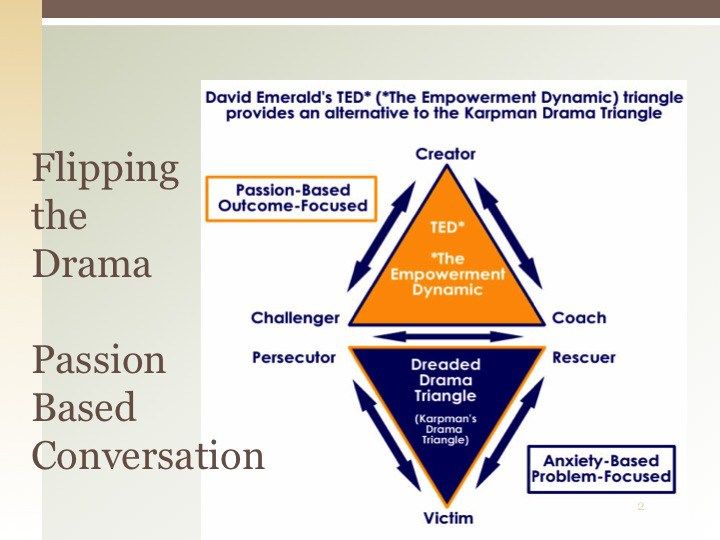 I would like to clarify that I do not think the TED triangle is outcome focused as much as I think it is process focused, but process focused does indeed lead to more satisfying and holistic outcomes. In fact, I think Karpman’s Drama triangle is outcome focused, and that means that those in it reason from desired outcomes rather than from evidence and sound underlying assumptions; aka reasoning from a conclusion (emotionally charged and unconscious rationalizations from their emotional attachments to outcomes) rather than from evidence that leads to more true outcomes. To read more on transitioning from Karpman’s Drama triangle to the TED triangle, I recommend the following article HERE.

In response to what was going on in the world with covid passports and other totalitarian measures dressed up as a medical emergency in January of 2022, I wrote the following:

The belief that “one has no options” is the chief cornerstone of a victim mindset, so when an evil force attempts to remove all of our options and paints us into the corner to the point that we believe that we are their victims, the belief becomes our consent to the drama triangle of victim, villain, and hero, which therefore grants such evil doers power over us. The good news is that every time we are confronted with these dilemmas, we are placed in a position where we are able to die and resurrect to our greatest fear, and resurrection causes us to transcend that fear, along with the victim mentality that goes along with it, therefore causing us to transcend the situation itself. Many succumb to being painted into the corner and therefore consent to being victims, while a minority are stretched by their lack of options to such an extent that they go through the death and rebirth process, and break completely free from any supposed systems of external control. This transcendent minority are like gods among mortals, living sovereign lives without external governance, controls, or coercion; they’re essentially able to walk on water in the midst of any storm. ~Nathan Martin

“Defeat is a state of mind; no one is ever defeated until defeat has been accepted as a reality.” ~Bruce Lee

Lest you believe that Musk really is one of us, and not in bed with the UN, the WEF, or Clause Schwaab’s great reset, take a look at the following graphic: 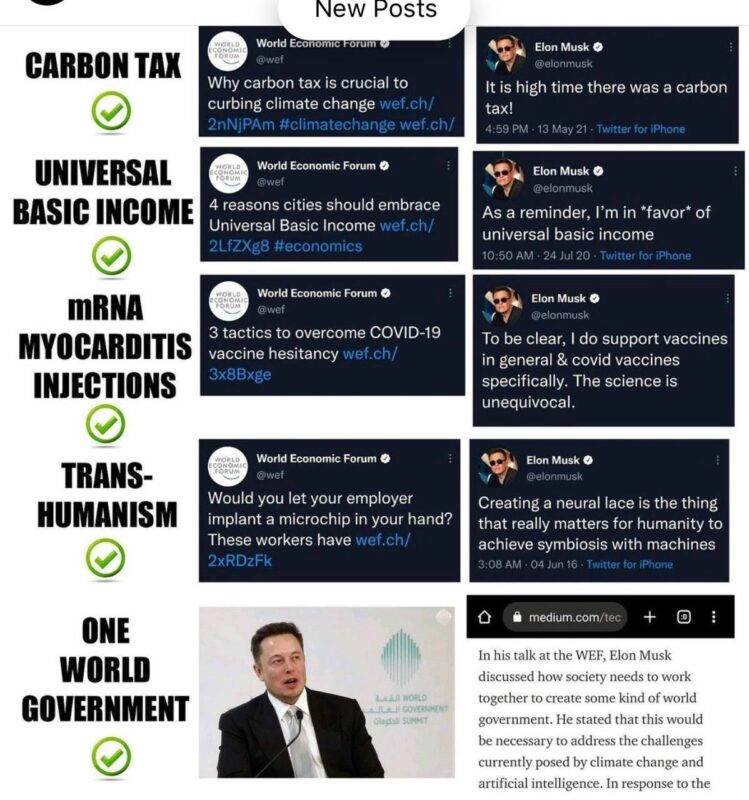 Interestingly enough, I’m not upset by any of this, but rather relieved by this next step of public disclosure headed by Musk, because it represents a reprieve and shift out of the current totalitarian two step dance that we currently find ourselves in—the beginning of the end of the Whore of Babylon’s [corporate] system.  While I don’t trust Elon Musk, I don’t despise or hate him either, as he’s playing his part in a greater production where even evil serves the plans of the Divine; his appearance on the scene is a step in the right direction for me and many others—we all need to go through this phase to get to whichever timeline we are choosing to step onto next. We find ourselves in the train station waiting for our specific train(s) (aka, various timelines) to leave the station, so let’s enjoy our time while we’re still all here together.

Additionally, I’m ready for a return of freedom, no matter how temporary it might be on the outside, as the last two years have transformed myself and many others into sovereign beings capable of sustaining our liberties and natural rights throughout any storm. This new [temporary] age of freedom is in some ways intended to compensate for those of us who have become more sovereign due to harnessing the power of the TED triangle of creator, challenger, and coach, because our free will must still be respected, and this time period will also act as a type of camouflage that will dim the contrast between the newly developed sovereigns and the rest of humanity 1.0, making the contrast much less noticeable. During this time period, those who have not done their inner work will believe themselves to be free, and many of them may be much less willing to go within and individuate themselves from the collective unconscious, because the times are too good. However, when the times do eventually take a turn for the worst, the masses will be more than willing to merge with AI and upload their consciousness to escape any supposed cataclysm or certain doom. If you’re reading this, I seriously doubt you’ll be one of them, but you will definitely have friends and family members who will gleefully follow the pied piper to their synthetic transformation.