You are here: Home » Critical Thinking » Logic and Morality 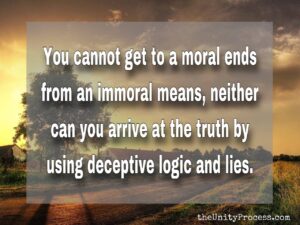 Why is it important to learn critical thinking skills and logic, as well as logical fallacies? It is important to learn the correct use of logic, especially multilogical thinking, in order to arrive at truthful conclusions, but many replace logic with logical fallacies, which are a form of anti-logic, as they are deceptions that take the place of logic (deceptive reasons and reasoning), since fallere, from whence fallacy is derived, is the Latin word for deception. Many people are spouting deceptions to justify their position, which is, well, illogical, animalistic/dehumanizing (because reason is what separates humanity from the animal kingdom), Machiavellian (the ends of winning an argument and implementing an agenda justify the means of using deceptive logic and lies), and is therefore objectively immoral. One cannot get to a moral ends from an immoral means, neither can they arrive at the truth by using deceptive logic and lies.

[S]ophistry – false arguments that masquerade as reasoned truths in support of a case. Sophistry, which bears the same relation to truth as camouflage does to reality is, interestingly, no longer a word in popular usage, perhaps because it has been superseded by terms such as ‘debate’. ~ Victoria Hammond, Cow Up a Tree, 1999

To inoculate oneself from logical fallacies, one must refine their own thinking and use self-reflection and observation to deconstruct any and all beliefs (outcomes/ends) that they themselves have not thought themselves to on their own, learn the logical fallacies, observe when logical fallacies are used by their own thinking to justify a viewpoint, stop using fallacies in place of logic in one’s own thinking and in discussions, and to work through any emotional attachments to outcomes that might make them prone to using faulty logic to get their way. Once performed internally, such a person becomes immune to external forms of manipulation and deceptions that professional manipulators (sophists) might use to get their way.