You are here: Home » Archives for stupidity 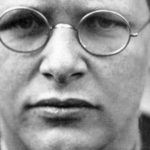 One becomes stupid when they abdicate their will over to an ideology or collective; while they retain their intellect, their will to think independently, and to question their beliefs, is forfeited. “This was taken from a circular letter, addressing many topics, written to three friends and co-workers in the conspiracy against Hitler, on the tenth anniversary of Hitler’s accession to the chancellorship of Germany.” ~Dr Cliff “DK” Kelly ‘Stupidity is […] Read more »