You are here: Home » Critical Thinking » Why Modern Movies Suck – They Teach Us Awful Lessons

I just love the Critical Drinker and his manner of presenting thoughtful ideas in such a brash and irreverent tone. His series “Why Modern Movies Suck” is great, and this is the third installment in the series. I’ll probe deeper into the underlying psychology of what he has identified as a problem, below.

In a nutshell, Hollyweird is intentionally engineering a deadly combination of arrogance and ignorance into people, and it is meant to foment what is known as the Dunning Kruger Effect in them. By Hollyweird creating all powerful “woke” beings that lack meaningful character arcs, and therefore don’t have to work through any challenges that produce growth in their inner character or external abilities, society’s engineers are cultivating arrogant people who think that they too should expect everything to come to them easily and effortlessly, and without any inner or external work. Unfortunately for us, this will cause the impressionable minds soaking up Hollyweird’s newest generation of stories to feel powerless when everything they thought they should be and have doesn’t work out for them; the feeling of powerlessness is the emotion of anger, which communicates the underlying message “this isn’t fair”.

According to the book “The Secret Language of Feelings” by Calvin D. Banyan, anger progresses into depression, like so:

In the above flowchart of anger to depression, a person first feels powerless in a situation, that something they are experiencing is unfair, and they try to do an action to make it fair, but when the situation doesn’t become fair after continual actions that they think should make it fair, they become frustrated. Frustration tries even harder to make it fair, and the more frustrated they feel as a result of the unfairness that they are unable to correct, they build up too much frustration and would literally pop from the stress and die, hence why depression kicks in as a safety release valve to essentially say “fuck it, I quit”, which lets off enough steam to prevent us from having a mental and/or physical breakdown. At the root of depression is anger/powerlessness, and doing an action to correct a so-called unfairness cannot fix the problem, since actions are not power—understanding (logic/causality/empathy) is power.

“Beneath our poised appearance, the truth is we are completely out of control. Causality. There is no escaping it. We are forever slaves to it. Our only hope, our only peace is to understand it, to understand the why. Why is what separates us from them, you from me. Why is the only real source of power, without it you are powerless. And this is how you come to me: without why, without power, another link in the chain.” ~The Merovingian, The Matrix Reloaded

Whenever a person becomes angry, they are feeling powerless, and many think that using their anger to intimidate or vent their outrage will cure the underlying root causes of their anger, but that’s like saying the color brown is the answer to world hunger—it’s not relevant, as one has nothing to do with the other in the relationship between cause and effect. In essence, the current generation of consumers of entertainment are being spoon fed the idea that they are perfect, and that everything should come to them on a silver platter, thus setting them up as victims whenever life doesn’t pan out the way that they were led to believe it should pan out for them. Anytime something doesn’t work out the way they had it in their mind, they will automatically externalize and think that there must be an oppressor who is preventing them from having it, even if it is the universe or God himself. They have externalized their power, and can only get it back by attacking and defeating those they perceive to be oppressing them. When all else fails, they may even call on the all powerful government to make it fair for them, thus forfeiting even more of their natural rights in the name of fairness.

Incidentally, those who do not wish to lash out at an oppressor in an arrogant display of moral outrage may just settle into learned helplessness and stop trying to find a way out of their powerlessness—fate is their oppressor, and they have no way of fighting fate. While this is far better than moral outrage, because it lacks the arrogance and blame of the first coping mechanism, this way of coping is still unable to break free from the mental pattern, for such people just live in a depressed state of “fuck it” hoping that fate will one day look favorably upon them. It’s still a victim mindset with externalized power, but at least it’s not shadow projecting all kinds of hate and blame onto others.

This is a sad state of affairs for many people, including those who actually take responsibility for the quality of their life and thinking, because their autonomy and personal success can easily be deemed by professional manipulators as the reason for the world’s problems (divine child archetype). The solution to this powerless thought pattern is taking radical responsibility by working through one poor belief at a time, which re-internalizes our power from so-called external oppressors, and realizes that we alone are responsible for creating high quality lives for ourselves. Far from being handed to us, we must earn our rewards through developing our inner character and external abilities in the face of the difficult challenges that life presents to us. The more that we gain insight and understanding of ourselves and our place in the world, through self-reflection and self-observation, the more power we will accumulate within ourselves, which means the world will seem more fair, because we’re now playing by the rules and can therefore live powerful and meaningful lives.

For a better understanding of the Dunning Kruger Effect, see below: 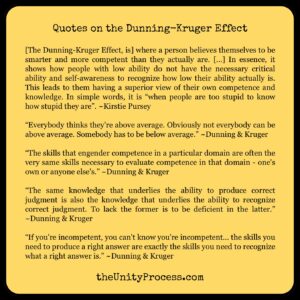