You are here: Home » Critical Thinking » My Initial Thoughts on the Ukranian/Russian War 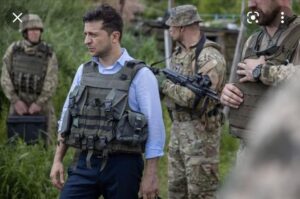 In regards to Ukranian President Zelenskyy, the dude was an actor playing a role as an actor who became president, and then said actor became president shortly thereafter. The question is not “is he a puppet”, but rather, “who’s hand is up his arse?” He was probably installed as president for this very “role”, because as Shakespeare said,

“All the world’s a stage, And all the men and women merely players; They have their exits and their entrances; And one man in his time plays many parts, His acts being seven ages.”

He’s doing a great job in his current “role”, wouldn’t you agree?

“In politics, nothing happens by accident. If it happens, you can bet it was planned that way.” ~Franklin D. Roosevelt

Now I’m not going to pretend that I know the totality of what is actually going on in the big picture, but I can at least say with 100% certainty that whatever we’re being shown at face value via the media, where the concept of “media” comes from the Greek goddess “Medea” (planner/schemer), is fake, and humanity is being taken for a ride of half-truths and outright lies. However, the masses ingesting the staged, yet tragic invasion with very real consequences, are perfectly content with accepting the false pretenses and reasoning being spoon fed to them via the schemers in the “Medea”.

“For the great majority of mankind are satisfied with appearances, as though they were realities, and are often more influenced by the things that seem than by those that are.” ~Niccolo Machiavelli

I’m not pro Putin and anti Ukraine, nor am I pro Zelenskyy and anti Russia—I’m pro humility, knowing that I don’t know it all, I’m pro empathy, realizing that I need to hear multiple perspectives from those on various sides of this tragedy, I’m pro multilogical reasoning, in that I need to understand this from multiple dimensions, especially those that go well beyond the political level and into the realm of the “Great Reset” as proposed by the World Economic Forum (WEF) and Clause Schwaab, and I’m above all I’m pro TRUTH, which is the synthesis of all of the above into a unifying picture. Anything that falls short of this standard of truth is just another superficial narrative meant to confuse, obfuscate, divide humanity via staged dialectics, and herd them into a pre-planned and centrally controlled outcome.

The antidote, as always promoted by me and this site, is radical individualism accomplished through clear and logical thinking/being that has been turned inwards in self-reflection, performing shadow work that strips the personality of impurities, setting healthy boundaries to clearly define and defend one’s personal space/property, and a positive focus meant to intentionally create one’s reality, all of which creates a feedback loop that promotes ever more clear and logical thinking/being.