You are here: Home » Alchemy » Reclaim your Personal Power by Depersonalizing Your Past!

The key to reclaiming our personal power is depersonalizing the bad things that seemingly happened to us as children from our families, teachers, and peers, as we cannot control others but we can control our own thoughts, feelings, and behaviors—meaning the location of our power is found within us and not outside of us (often called locus of identity/control). Once we go to the root causes of our upsets, which are found in our formative childhood experiences, we won’t take things as personally as adults when we experience what many perceive as negativity, which ironically limits what negativity a person can actually experience from those around them, because you can’t push a button that doesn’t exist. Some things that aren’t even meant to be personal are taken personally by us as children, for instance parent’s going through a divorce, just because that’s how children are wired, they’re self-absorbed and psychologically enmeshed with their parents until which time they begin to become more independent. Consequently, many things that aren’t personal are taken personally by us as adults just because they feel similar to something we experienced, personal or not, as children; therefore working through and depersonalizing our childhood is a meaningful step towards living an empowered and psychologically rich life. 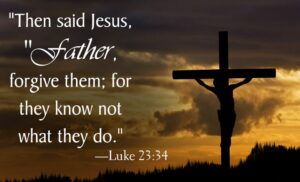 Jesus is the ultimate archetypal illustration of not taking things personally as evidenced by his statement on the cross “father forgive them for they know not what they do.” To literally experience martyrdom and not take it personally neuters what power any persecutors might think they have over a person, because the one being “martyred” is literally saying “any power you think you have over me is an illusion because I am staying centered within my own being, and I alone have power over my experience.” It is well known in mystical and psychological circles that the story of the cross is a powerful archetypal and alchemical metaphor for the personal growth that occurs from going through cycles of death and rebirth, for once someone dies to any fear they might have, they find the capacity to truly live their lives free from personal attacks and/or other risks that might be lurking around the next corner. As the saying goes “you cannot kill a dead man,” and likewise, “you cannot make somebody feel something as personal when they’ve died to the fear of people making things personal.” As I already mentioned, “you can’t push a button that doesn’t exist.“

One Response to “Reclaim your Personal Power by Depersonalizing Your Past!”