You are here: Home » Critical Thinking » Should We Use the Bible to Measure Truth?

It is standard Christian teaching that when evaluating what somebody else says or writes, to judge it against Biblical scripture as the test of whether or not it is true; and anything that does not line up with their understanding of what they think the Bible is saying is therefore false. In this way, they have placed what the Bible says, and more importantly, what their interpretation of what the Bible says, as their standard to measure truth by. Is this reasonable, and if so, why or why not?

It is our understanding that this version of Christian reasoning is not only flawed, but a false version of the Trivium method of critical thinking; one that is perfectly tailored to create an infinite loop of circular reasoning in which the adherent becomes trapped within it. In the Trivium method of critical thinking, truth is the state of non contradiction between knowledge (grammar) and understanding (logic), and when knowledge and understanding exist in union together without contradictions, they are able to output as wisdom (rhetoric). However, in this false religious Trivium, they set up the Bible as their knowledge, and then use their understanding to bypass past any possible contradictions, especially those between the old (Jewish) and new (Christian) testaments.

Truth can be described by this simple formula:

Fallacy comes from the root Latin word “fallere” and “fallax”, which means “deceive” or “deceiving”.  A Logical Fallacy would therefore be “deceptive logic”; it is quite literally the vehicle of deception.  Deceptive logic is often used to manipulate a person into a negative feedback loop, where they remain stuck repeating the same logical error over and over again without the ability to find a way out. In computer programming terminology, contradictory beliefs that cause circular reasoning can be related to an infinite loop, which according to Wikipedia is “a sequence of instructions in a computer program which loops endlessly, either due to the loop having no terminating condition, having one that can never be met, or one that causes the loop to start over.” 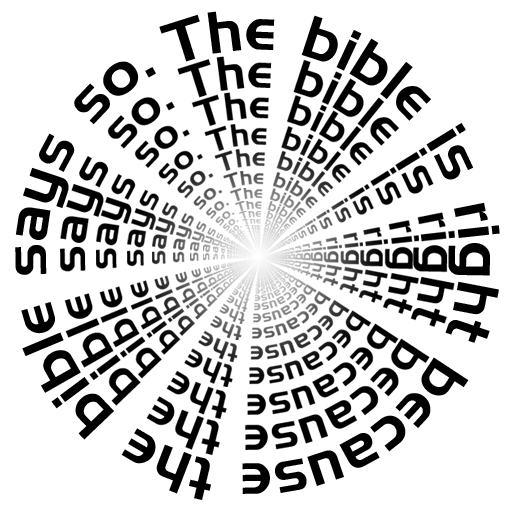 For the best example of circular reasoning, a Christian may state that “the bible is true”, and when asked what makes the Bible true, they will reply, “because God said it was true in the Bible.” This is not only fallacious logic, but traps the adherent’s mind in an infinite feedback loop. If a logical fallacy is deceptive logic, then it is the foundation of a lie, and therefore cannot prove truth.

Now a Christian’s use of deceptive logic does not mean that the Bible is true or false, that God does or does not exist, or that Jesus was or was not ever here, but it does show that they are perpetuating deceptive logic, as the state of input and logic existing in union together without contradictions is truth. If there is a lack of knowledge, deceptive logic, or both present, there is also undoubtedly contradictions present, therefore any output cannot be proven as true.  Now the wording of how a Christian might use circular reasoning may vary, and they may even become a bit more sophisticated in their wording, but it doesn’t change the fact that it is deceptive logic .

One common bypass to this glaring bit of deceptive logic is that it requires faith to overcome. However, this is like saying that if I program an infinite loop into a computer and do not have faith, it will repeat forever, but if I do have faith, it will actually not give the same results of infinitely repeating and eventually self-correct. If an infinite loop cannot self-correct because it is by definition an infinite loop, how is it logical to expect “the Bible to be the absolute word of God because God said so in the Bible?” This logic is testable on a computer right now by anybody with basic programming skills, and it will end up in an infinite loop 100% of the time.

In this example, “…the bible is true” would represent line 10, while “because God said it was true in the bible…” would represent line 20.  Unless power fails on the computer, this loop will continue forever without stopping.  This is the logical fallacy (deception/lie) of circular reasoning, and the deception that supports most Christian theology.

Their version of faith could really be called the definition of hope, as they are hoping that the fallacy will show them something different from what it is capable of showing; whereas faith is meant to be supported by logic, not as a bypass around logic.

If the Bible is true, it cannot be because…

It is only true if…

Those that state that the Bible is proof that God exists, or that the Bible is the truth that we must measure all claims, writings, visions, and ideas against, simply because they interpret that many places in the Bible may state that it does — does not prove that it is true. In fact, since it employs the circular reasoning logical fallacy as its logic, it is therefore deceptive logic; and at the least is manipulative, and at the most is a lie.  The Bible may indeed have some truth contained within its pages, and it may be beneficial to read, study, and understand, but any truth that it may contain does not prove that the entire Bible is true, or that their interpretation of the Bible is true.  It’s not that we must measure all things against the Bible, it is that we must measure all things with our critical thinking skills, ensure that it is logical and without contradictions, and yes, we must even measure the Bible, and any being claiming to be God, by this standard.

The wisdom of the prudent is to give thought to their ways, but the folly of fools is deception [fallacy]. ~Solomon, Proverbs 14:8

The Word [logos / logic] became flesh and made his dwelling among us. We have seen his glory, the glory of the one and only Son, who came from the Father, full of grace and truth. ~John 1:14

Jesus answered, “I [logos / logic / understanding] am the way and the truth and the life. No one comes to the Father except through me. ~Jesus, John 14:6

For more Gnostic perspectives on Jesus and logic, see the following articles:

5 Responses to “Should We Use the Bible to Measure Truth?”