You are here: Home » Alchemy » Jung’s Theory of the Self & Collective Shadow Projection 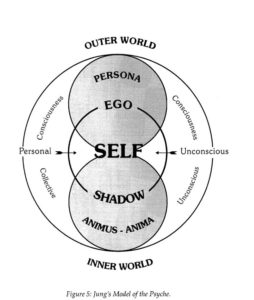 Let’s talk about Carl Jung’s theory of the Self, which is concerned with the microcosm, and explore how it might correspond to the collective manifestation in the macrocosm. I see the current makeup of the West, especially the dominant polarized swing into identity politics, as evidenced by radical anti-male sentiment, anti-white sentiment, and anti-straight sentiment that’s manifested in the West a collective shadow, as well as much confusion about the roles of one’s internal anima and animus (feminine and masculine psychological principles), as a necessary step in our cultural development. Jung considered the shadow to be the underlying belief patterns that one is unconscious of that motivates one’s behaviors and outcomes, and also aspects of oneself that are projected onto others that they consider villainous; after all, hate of another is preferable to self-hate.

The polarized swing from egocentrism to collective shadow possession / projection was made possible by an earlier era of overt egocentrism (among other things), which is an individual’s, and therefore in this situation, our collective’s, over-identification with the persona. The ego is our conscious mind, and the persona is the mask that we choose to identify with and show to those around us, but it does not necessarily reflect who we actually are underneath this externalized identity. Whereas egocentric over-identification with the persona is a typical a step in our individual growth, the shadow will invariably creep up to the surface next—and it needs to be dealt with in an integrative manner.

As one consciously directs their focus onto the shadowy contents of their unconscious, not in judgment, but rather with the intention of observing and then integrating them, both the conscious ego and the unconscious shadow integrate into what Jung termed the “Self”, which much like a chemical reaction, produces a third substance from the two parts. The process of becoming an integrated Self distinct and differentiated from the collective unconscious was termed “individuation”, and it is my opinion that an internalized (individuated) identity is the most conducive to self-directed living and personal sovereignty.

Things like unfettered mass immigration and taxation at gunpoint cause national and cultural fragmentation and dis-integration much in the same way that a traumatic event, such as a rape or other aggressive violation of one’s personal boundaries causes fragmentation and dis-integration of one’s psychological makeup. However, we’re not being victimized by this, as it is our own collective projections and underlying belief patterns that are coming to the surface to be seen and dealt with, so that we might be able to withdraw our projections, and take responsibility for our own well-being. It is becoming more obvious that we are doing this to ourselves, and that it is not being done to us by an external villain; we are the true villains, and we are the only heroes that are capable of hearing the call to action, and following the individual journey to personal sovereignty—and therefore collective sovereignty.

“Remember everything that irritates us about others can lead us to an understanding about ourselves.” ~Carl Jung

“If you imagine someone who is brave enough to withdraw all his projections, then you get an individual who is conscious of a pretty thick shadow. Such a man has saddled himself with new problems and conflicts. He has become a serious problem to himself, as he is now unable to say that they do this or that, they are wrong, and they must be fought against… Such a man knows that whatever is wrong in the world is in himself, and if he only learns to deal with his own shadow he has done something real for the world. He has succeeded in shouldering at least an infinitesimal part of the gigantic, unsolved social problems of our day.” ~CG Jung, “Psychology and Religion” (1938). In CW 11: Psychology and Religion: West and East. P.140

“Knowing your own darkness is the best method for dealing with the darknesses of other people.” ~Carl Jung